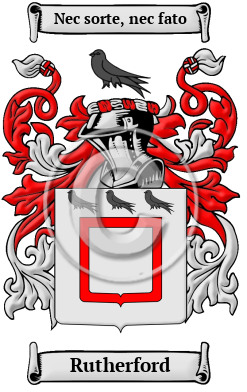 In the ancient Scottish-English border region, the ancestors of the name Rutherford lived among the Boernicians. They lived in the Parish of Maxton, where Rutherford was a town, near Roxburghshire. The toponym Rutherford is derived from the Old English words hryder meaning cattle and ford, a shallow part of a river.

Early Origins of the Rutherford family

The surname Rutherford was first found in the Parish of Maxton, town of Rutherford, county Roxburghshire. The first bearers of Rutherford on record were two knights: Gregory and Nicholas de Rutherford who were listed in the reigns of William the Lion and Alexander II. About the same time, Sir Richard, lord of Rotherford was listed as was William de Rwthirford, a cleric who witnessed a charter by Henry de Grahame. Nicholas de Rothirford, knight, rendered homage to King Edward I of England at Montrose in 1296, as did Margarete la fielle Nicol de Rotherforde who also rendered homage for her lands. [1]

Early History of the Rutherford family

Notable amongst the family name during their early history was Samuel Rutherford (1600-1661), Scottish principal of St. Mary's College, St. Andrews, born about 1600 in the parish of Nisbet, now part of Crailing, Roxburghshire. [2] Andrew Rutherford (d. 1664), was a Scottish soldier of fortune, created 1st and only Earl of Teviot by Charles II; and Samuel Rutherford (ca. 1600-1661), a Scottish theologian and controversialist, born at Nisbet, Roxburghshire, educated at Edinburgh University, where he...
Another 73 words (5 lines of text) are included under the topic Early Rutherford Notables in all our PDF Extended History products and printed products wherever possible.

Migration of the Rutherford family to Ireland

Some of the Rutherford family moved to Ireland, but this topic is not covered in this excerpt.
Another 60 words (4 lines of text) about their life in Ireland is included in all our PDF Extended History products and printed products wherever possible.

Rutherford migration to the United States +

After making their great crossing, many Boernician-Scottish families settled along the east coast of North America. When the War of Independence broke out, United Empire Loyalists moved north to Canada while the rest stayed to fight. The ancestors of many of these Scots still populate the continent. This century, through Clan societies and other Scottish organizations, they began to rediscover their collective national heritage. Analysis of immigration records indicates that some of the first North American immigrants bore the name Rutherford or a variant listed above:

Rutherford Settlers in United States in the 17th Century

Rutherford Settlers in United States in the 18th Century

Rutherford Settlers in United States in the 19th Century

Rutherford Settlers in Canada in the 18th Century

Rutherford Settlers in Canada in the 19th Century

Rutherford Settlers in Australia in the 19th Century

Rutherford Settlers in New Zealand in the 19th Century

Historic Events for the Rutherford family +

Suggested Readings for the name Rutherford +