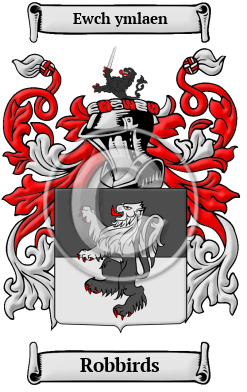 The Robbirds surname is derived from the personal name Robert. This name was originally came from the Old German words "hrod" and "behrt," which mean "fame" and "bright." It was introduced to Britain by the Normans during the time of Edward the Confessor, and became very popular. A large number of diminutives and pet-forms were derived from this name in early times.

Early Origins of the Robbirds family

The surname Robbirds was first found in Denbighshire (Welsh: Sir Ddinbych), a historic county in Northeast Wales created by the Laws in Wales Act 1536, where they were descended from Einion Efell, Lord of Cynllateh, through Howell ap Iolyn of Llangedwyn, and were directly descended from Rhodri Mawr, King of Wales.

Early History of the Robbirds family

The Welsh have an extremely large amount of spelling variations of their native surnames to their credit. It was up to the priest or the scribe taking the official records to determine how the spoken name was to be made literal. As time progressed, the old Brythonic names of Wales were recorded in English, which was especially problematic since the English language had extreme difficulty recording the highly inflected sounds of Cymraeg. Spelling variations were, however, also carried out according to an individual's design: a branch loyalty within the family, a religious adherence, or even patriotic affiliations could be indicated by spelling variations of one's name. The spelling variations of the name Robbirds have included Roberts, Robert, Robartes, Robarts and others.

Prominent amongst the family during the late Middle Ages was William Roberts (1585-1665), Welsh Bishop of Bangor; Richard Roberts, Sheriff of Cornwall; Michael Roberts (died 1679), Welsh-born, Principal of Jesus College, Oxford from 1648 to 1657; John Robartes, 1st Earl of Radnor and Viscount Bodmin PC (1606-1685), an English politician; and his son, Francis Robartes FRS (c. 1649-1718), an English politician; and John "Bartholomew" Roberts (1682-1722), Welsh pirate who raided ships off America and West Africa between 1719 and 1722. He changed his first name to Bartholomew after the buccaneer Bartholomew Sharp. He was the most successful pirate of the Golden...
Another 115 words (8 lines of text) are included under the topic Early Robbirds Notables in all our PDF Extended History products and printed products wherever possible.

Migration of the Robbirds family to Ireland

Some of the Robbirds family moved to Ireland, but this topic is not covered in this excerpt.
Another 73 words (5 lines of text) about their life in Ireland is included in all our PDF Extended History products and printed products wherever possible.

Migration of the Robbirds family

Many Welsh families joined their Scottish and Irish neighbors during the late 1800s and early 1900s in seeking refuge in North America. Like the Irish and Scottish, many Welsh anxiously awaited the work, freedom, and opportunities that they believed lay in North America. Those who did journey over to the United States and what became known as Canada often realized those dreams, but only through much toil and perseverance. Whenever and however these Welsh immigrants arrived in North America, they were instrumental in the creation of the industry, commerce, and cultural heritage within those two developing nations. In the immigration and passenger lists a number of early immigrants bearing the name Robbirds were found: Eleanor and Griffith Robarts, who settled in Barbados in 1676; James Robarts settled in New Haven Conn. in 1822; James Robert settled in Maryland in 1666.