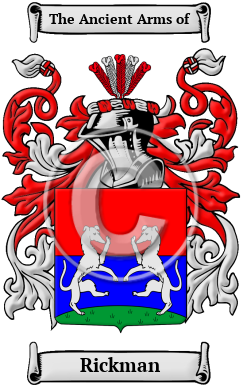 Bavaria, Germany is the ancestral home of the Rickman family. The Rickman surname evolved as a local name for a family that lived in Bavaria, where the Rickman family achieved distinction for its contribution to the region's medieval society. This surname was a nickname surname, and derived from the German words, reich, which means rich, and mann, which means man. Thus, the bearer of this name was known for his material wealth, or perhaps because he behaved in a princely or regal manner.

Early Origins of the Rickman family

The surname Rickman was first found in Bavaria, where the name was anciently associated with the tribal conflicts of the area. They declared allegiances to many nobles and princes of early history, lending their influence in struggles for power and status within the region. They branched into many houses, and their contributions were sought by many leaders in their search for power. Chronicles first mention Hatnel Richman in 1380, and one Richmannus of Bremen in 1382.

Early History of the Rickman family

One can encounter great variation in the spelling of surnames: in early times, spelling in general, and thus the spelling of names was not yet standardized; and later, spellings would change with branching and movement of families. Variations of the name Rickman include Reichmann, Reichman, Reichmen, Richmann, Richman, Richmen, Reichmanner, Reichmaenner, Richmanner, Richmaenner, Rickman, Rickmen, Reychman, Reychmann and many more.

Prominent among members of the name Rickman in this period include Theodor Reichmann (1849-1903), a German baritone from Rostock who joined the Vienna Opera in 1882...
Another 26 words (2 lines of text) are included under the topic Early Rickman Notables in all our PDF Extended History products and printed products wherever possible.

In the United States, the name Rickman is the 3,819th most popular surname with an estimated 7,461 people with that name. [1]

Rickman migration to the United States +

Thousands of German settlers came to North America between the mid-17th and mid-20th centuries. The hardships of the long voyage were balanced by the opportunity to escape poverty and religious persecution. The descendents of these settlers still populate the states of Pennsylvania, Texas, New York, Illinois, and California. Many also live in Ontario and the prairie provinces of Canada. An inquiry into the early roots of North American families has revealed a number of immigrants bearing the name Rickman or a variant listed above:

Rickman Settlers in United States in the 19th Century

Rickman Settlers in United States in the 20th Century

Rickman Settlers in Canada in the 20th Century

Rickman Settlers in New Zealand in the 19th Century

Historic Events for the Rickman family +