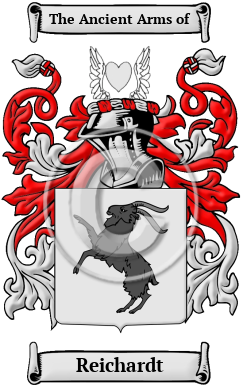 The surname Reichardt is a Bavarian nickname surname. German nicknames came from eke-names, or added names, and tended to describe a physical characteristic or other attribute of their initial bearer. Reichardt is a name for a brave or strong person. It is a common name among the English, French, and Flemish/Dutch communities, as well as the German, and stems from the words ric, meaning power, and hard, meaning hardy or strong.

Early Origins of the Reichardt family

The surname Reichardt was first found in Bavaria, where the name became noted for its many branches within the region, each house acquiring a status and influence which was envied and enrolled by the princes of the region. The literal meaning of the name is "brave ruler," and chronicles first mention Hantsch Richard of Liegnitz in 1381, and Hans Reichart of Friedland in 1381. In their later history the name became a power unto themselves and were elevated to the ranks of nobility as they grew into this most influential family.

Early History of the Reichardt family

This web page shows only a small excerpt of our Reichardt research. Another 160 words (11 lines of text) covering the years 1560, 1733, 1749, 1752, and 1814 are included under the topic Early Reichardt History in all our PDF Extended History products and printed products wherever possible.

Prominent among members of the name Reichardt in this period include Johann Friedrich Reichardt (1752-1814), who was the court composer and conductor to Frederick the Great and Frederick II, and...
Another 29 words (2 lines of text) are included under the topic Early Reichardt Notables in all our PDF Extended History products and printed products wherever possible.

Reichardt migration to the United States +

Reichardt Settlers in United States in the 18th Century

Reichardt Settlers in United States in the 19th Century

Historic Events for the Reichardt family +