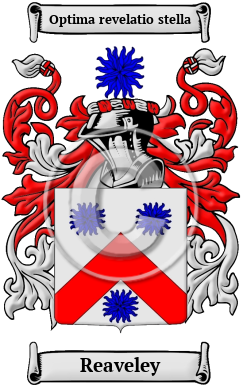 Early Origins of the Reaveley family

The surname Reaveley was first found in Northumberland. "The Reveleys, who trace their pedigree to the reign of Edward II., were originally seated at the manor-house of Reveley, on the northern bank of the river Beamish, at the south-east foot of Cheviot, and subsequently at Ancroft, in Northumberland. " [1]

Early History of the Reaveley family

This web page shows only a small excerpt of our Reaveley research. Another 98 words (7 lines of text) are included under the topic Early Reaveley History in all our PDF Extended History products and printed products wherever possible.

Spelling variations of this family name include: Reveley, Reevely, Revely and others.

More information is included under the topic Early Reaveley Notables in all our PDF Extended History products and printed products wherever possible.

Migration of the Reaveley family to Ireland

Some of the Reaveley family moved to Ireland, but this topic is not covered in this excerpt. More information about their life in Ireland is included in all our PDF Extended History products and printed products wherever possible.

Migration of the Reaveley family

Some of the first settlers of this family name or some of its variants were: Elizabeth Revelle and her husband Thomas who settled in Virginia in 1637; Peter Revelle arrived in Philadelphia, Pennsylvania in 1803; Edward Revely settled in Dominica in 1774..