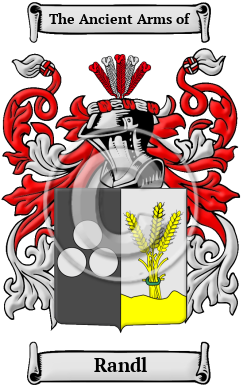 The Randl surname first began to be used in the German state of Bavaria, some time after the 12th century, when hereditary surnames were adopted according to fairly general rules, and names that were derived from locations became particularly common. The family name Randl is a local surname. Originally denoting the proprietorship of an estate or influence within a village, the German preposition von, which means from or of, used with local names, was taken as a mark of aristocracy. The surname Randl was given to someone who lived in Bavaria, where they rose to prominence through their involvement in the social and cultural affairs of the area. The root form of this name is thought to be "Reindl" and "Reinl," which began as short forms for "Reinhard" or "Reinhold." There is a town called Rendel, in the Wetterau region of Hessen, to which the family may have lent its name, or from which the family name may come.

Early Origins of the Randl family

The surname Randl was first found in Bavaria, where the family contributed greatly to the development of an emerging nation and would later play a large role in the political conflicts of the area. The family branched into many houses, many of which acquired estates and manors throughout the surrounding regions, where they played significant roles in the social and political affairs. The root name for all variations is thought to be "Reindl" and "Reinl," which began as short forms for "Reinhard" or "Reinhold." Individual bearers of the name first mentioned in ancient chronicles include Conrad Rendelere of Hessen, who lived around 1316.

Early History of the Randl family

Another 45 words (3 lines of text) are included under the topic Early Randl Notables in all our PDF Extended History products and printed products wherever possible.

Migration of the Randl family

The great European flow of migration to North America, which began in the middle of the 17th century and continued into the 20th century, was particularly attractive to those from Bavaria who wished to escape either poverty or religious persecution. For many Bavarian tenant farmers, the chance to own their own land was a major incentive. So the widespread colonization of the United States began in 1650, when many immigrants from Germany settled in pockets in Pennsylvania, Texas, New York, Illinois, and California. In Canada, German settlement centered in Ontario and the prairie provinces. Among those of this surname listed in various historical records were: John Peter Rendel, who came to America in 1709 with his wife and daughter. Joseph Rendell arrived in Philadelphia in 1857. Erhard Reindell arrived in Philadelphia in 1753.