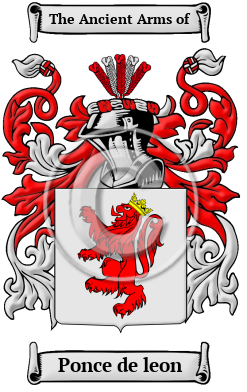 The surname Ponce de leon was first found in Leon, where the name originated in Visigothic times. One of the first records of the surname was Moses de León (c. 1250-1305), a Spanish rabbi and Kabbalist who is thought of as the composer or redactor of the Zohar. And much later, most people know of Juan Ponce de León (1474-1521), the Spanish explorer and conquistador and his association with the legend of the Fountain of Youth.

Spelling variations of this family name include: Leon, Leoni, Leone, Leonelli, Leonetti, Leonie and many more.

Prominent among members of the family was Pompeo Leoni of Madrid; Juan Ponce de León (1474-1521), Spanish explorer, 1st Governor of Puerto Rico, best associated with the legend of the Fountain of Youth; Juan Ponce de León II, (1524-1591), the 1st Puerto Rican to become acting governor of Puerto Rico; Pedro Ponce de Leon (1520-1584) a Spanish Benedictine monk who is...
Another 61 words (4 lines of text) are included under the topic Early Ponce de leon Notables in all our PDF Extended History products and printed products wherever possible.