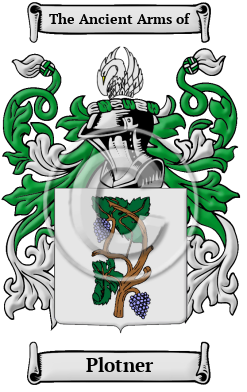 The German state of Prussia, which reached the zenith of its power in the late 19th century, is the glorious birthplace of the distinguished surname Plotner. In the medieval era, after the fall of the Roman Empire, the German lands were inhabited by a variety of barbarian tribes. The borders of the barbarian kingdoms changed frequently, but the region that became known in Prussia was roughly divided between the areas of Brandenburg-Prussia, West Prussia, and East Prussia. The colorful history of Brandenburg-Prussia, provides a glimpse at the oldest origins of the Plotner family.

Early Origins of the Plotner family

The surname Plotner was first found in Brandenburg, where the name was an integral part of a feudal society which would shape modern European history. Many prominent branches of the family would strive to make this name renowned as they contributed to the social, economic and political affairs of the region. Chronicles claim two different origins for this name. Some sources suggest that the origin is found in the mediaeval German word for the maker of breast plates for armor. This explanation is supported by the knight Otto cum Plata ("breast plate",) who lived at Ruegen around 1255. Other sources claim the name stems from the German word for "plateau." The famous Swiss humanist, Thomas Platter (1499-1582) wrote that "The Platters took their name from a house built upon a broad cliff edge."

Early History of the Plotner family

One can encounter great variation in the spelling of surnames: in early times, spelling in general, and thus the spelling of names was not yet standardized; and later, spellings would change with branching and movement of families. Variations of the name Plotner include Plathner, Plath, Plathe, Plather, Plate, Plat, Plater, Platt, Platter, Platten, Platen, Platener, Platner, Plattener, Pletener, Plettener, Plaettner, Plaetner, Plaeth, Plett, Pletter, Pletten, Pleten, Pleter, Plettner, Blate, Blatte, Blatten and many more.

Notable figures of the time with the name Plotner were Thomas Platter, who was a prominent humanist from Basel. He began as an Alpine goatherd, then journeyed through Germany on foot and became a printer...
Another 35 words (2 lines of text) are included under the topic Early Plotner Notables in all our PDF Extended History products and printed products wherever possible.

Plotner migration to the United States +

Prussia played an extremely influential role in shaping modern German history. It remained a part of Germany until after the Second World War. Prussia was divided among the Soviet Union, Poland, East Germany and West Germany. Many Prussians became residents of these new countries after the War, and many migrated to other parts of Germany or Europe, as well as to North America. In the United States, the majority of settlers landed in Philadelphia, and moved on to Ohio, Texas, Illinois, California, New York, and Maryland. Many German settlers also migrated to Canada, particularly to Ontario and the Prairies. Amongst the settlers in North America with this distinguished name Plotner were

Plotner Settlers in United States in the 19th Century

Plotner Settlers in United States in the 20th Century