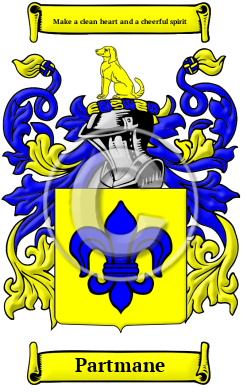 Early Origins of the Partmane family

The surname Partmane was first found in Somerset where the name was derived from the trade or occupation of a civic officer. "The family of this name in Somersetshire, appear to have been eminent so early as the reign of Edward I." [1]

Early History of the Partmane family

Spelling variations of this family name include: Portman, Portmann, Porttman, Partman and others.

Notables of the family at this time include Sir William Portman (died 1557), English jurist. His family belonged to Somerset, and he was in the commission of the peace for that county from time to time. In 1533 King Henry gave him a wardship, and he was one of the administrators of the will of Catherine of Aragon. [2] Sir William Portman (1641-1690), was a captor of the Duke of Monmouth and a descendant of the same Somerset...
Another 77 words (6 lines of text) are included under the topic Early Partmane Notables in all our PDF Extended History products and printed products wherever possible.

Migration of the Partmane family

Some of the first settlers of this family name or some of its variants were: Christopher Portman, who came to Carolina in 1679; and Caspar Portman, who settled in New York in 1881.