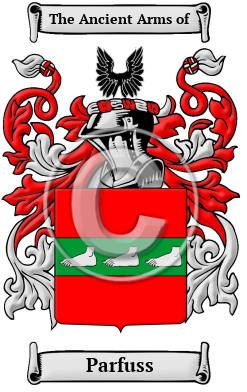 The German state of Prussia, which reached the zenith of its power in the late 19th century, is the glorious birthplace of the distinguished surname Parfuss. In the medieval era, after the fall of the Roman Empire, the German lands were inhabited by a variety of Barbarian tribes. The borders of the Barbarian kingdoms changed frequently, but the region that became known as Prussia was roughly divided between the areas of Brandenburg-Prussia, West Prussia, and East Prussia. The colorful history of East Prussia, which was located on the southern shore of the Baltic Sea and was bordered by Poland and Lithuania, provides a glimpse at the oldest origins of the Parfuss family.

Early Origins of the Parfuss family

The surname Parfuss was first found in the Altmark, where the name emerged in mediaeval times as one of the notable families of the region. From the 13th century on the surname was identified with the great social and economic evolution which made this territory a landmark contributor to the development of the nation. "Barfuesser," which means one who goes barefoot, was a label for the Franciscan order of monks; through their vow of poverty they would go without shoes and it gradually became a family name. The name belongs to an ancient noble family of the Altmark region just west of Brandenburg which gained power and influence throughout Germany. Ricolf Parfuse, for example, is shown to have been mayor of Cologne in 1216.

Early History of the Parfuss family

This web page shows only a small excerpt of our Parfuss research. Another 113 words (8 lines of text) covering the years 1216, 1635, 1699, and 1704 are included under the topic Early Parfuss History in all our PDF Extended History products and printed products wherever possible.

One can encounter great variation in the spelling of surnames: in early times, spelling in general, and thus the spelling of names was not yet standardized; and later, spellings would change with branching and movement of families. Variations of the name Parfuss include Barfuss, Barfus, Barvot, Barfuesse, Parfus, Parfus and many more.

Another 42 words (3 lines of text) are included under the topic Early Parfuss Notables in all our PDF Extended History products and printed products wherever possible.

Migration of the Parfuss family

The state of Prussia was a great influence on the shape of modern Germany. After the Second World War, Prussia's land was divided among the Soviet Union, Poland, East Germany and West Germany and the state was abolished. Some Prussians remained in those countries after the war, while many others migrated to North America in search of a new start. Philadelphia was their primary point of entry to the United States, after which many of them moved on to Ohio, Texas, Illinois, California, New York, and Maryland. A large number of Prussians also migrated to Ontario and the prairie provinces as United Empire Loyalists. Analysis of immigration records has shown some of the first Parfusss to arrive in North America, and among them were: Johann Georg Barfuss, who arrived in Philadelphia in 1752.