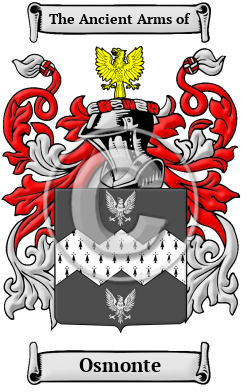 Osmund ( fl. 758), the "King of the South- Saxons, is said by Florence of Worcester to have been reigning in 758, at which time the South- Saxons were subject to Wessex, having been subdued by Caedwalla (659?-689) in 686. With the names of other South Saxon kings, under-kings, or ealdormen, the name of Osmund appears in late copies of charters preserved in the register of the church of Chichester." [2]

Osmund (fl. 803), Bishop of London, "succeeded bishop Heathobert, who died in 801, and was probably consecrated by Archbishop Æthelheard on his return from Rome in 802." [2]

Saint Osmund or Osmer (d. 1099), Bishop of Salisbury, was, "according to a fifteenth-century document preserved in the Register B at Salisbury, son of Henry, count of Seez, by Isabella, daughter of Robert, Duke of Normandy, and sister of William the Conqueror. He accompanied William to England, was one of the royal chaplains, and was eventually made chancellor, probably on the promotion of Osbern or Osbert (d. 1103) to be Bishop of Exeter in March 1072. " [2]

Early Origins of the Osmonte family

The surname Osmonte was first found in Dorset at Melbury Osmond, a village and civil parish in the union of Beaminster, hundred of Yetminster [3] that dates back to 1283 when it was first listed as Melebur Osmund. "Melbury" roughly means "multi-coloured fortified place" from the Old English "maele" + burh." [4] Hence collectively the place name meant "fortified place of a man called Osmund." [4] Little is known about the place name other than the parish church, St. Osmund's was thought to have been built before 1550. It was completely rebuilt in 1745. [3]

Used both as a surname and forename, early Gloucestershire records show Osemundus clericus (the cleric) there in 1222. Roger Hosemund was listed in the Feet of Fines for Northumberland in 1199 and Robert Osemund was found in Norfolk in 1221. [5]

The Hundredorum Rolls of 1273 prove the widespread use of the name by this time: John de Osemundeston Norfolk; Geoffrey Osmund, Devon; and Nicholas Osemund, Surrey. Later the Writs of Parliament recorded Richard Osmund, Middlesex, 1313; and John Osmond, Hertfordshire., 1315. [6]

In neighbouring Devon, the variants Osmer, Hosmer and Usmar claim ancestry back to the Domesday Book of 1086 where they were collectively recorded as Osmar and Osmer. [7] These variants derived their names from the Old English word meaning "god-fame," whereas the former names derived their name from the Old English word for "god-protector." [5] Early records include William Osmere who was listed in the Pipe Rolls for Devon in 1230 and later, Osmer ater Dune in the Subsidy Rolls for Sussex in 1296. The last entry was as a forename and in this case, it was derived from an the Anglo-Saxon personal name. [8]

One source claims "Osmœr was the name of the English soldier whose head, when he was killed by Eadric at the battle of Sceorstan (A.D. 1016), was boastingly paraded as that of King Eadmund, whom Osmær was said to closely resemble." [9]

Early History of the Osmonte family

Multitudes of spelling variations are a hallmark of Anglo Norman names. Most of these names evolved in the 11th and 12th century, in the time after the Normans introduced their own Norman French language into a country where Old and Middle English had no spelling rules and the languages of the court were French and Latin. To make matters worse, medieval scribes spelled words according to sound, so names frequently appeared differently in the various documents in which they were recorded. The name was spelled Osmond, Osmund, Osmont, Osmonde, Osmand, Osman, Ozment, Ozmond, Hosmer, Usmar and many more.

Another 48 words (3 lines of text) are included under the topic Early Osmonte Notables in all our PDF Extended History products and printed products wherever possible.

Migration of the Osmonte family

Because of this political and religious unrest within English society, many people decided to immigrate to the colonies. Families left for Ireland, North America, and Australia in enormous numbers, traveling at high cost in extremely inhospitable conditions. The New World in particular was a desirable destination, but the long voyage caused many to arrive sick and starving. Those who made it, though, were welcomed by opportunities far greater than they had known at home in England. Many of these families went on to make important contributions to the emerging nations of Canada and the United States. Analysis of immigration records indicates that some of the first North American immigrants bore the name Osmonte or a variant listed above: Adam Osman, who immigrated to Virginia in 1623; John Osmond, who settled in Maryland in 1749; David Osmond, who came to Nova Scotia in 1793; Lewis Osmond, who settled in Philadelphia in 1793.