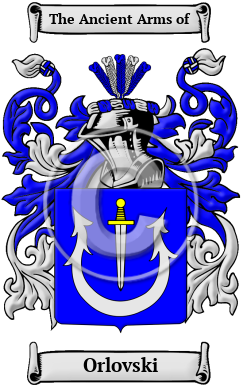 The Slavic surname Orlovski is a proud emblem of the Russian culture and heritage. The Slavic people originally used only a single name, but as the population grew and people began to travel, they began to find it necessary to take on an additional name to differentiate themselves. Fairly general principles guided the development of hereditary surnames in Russia. Most Russian surnames are either patronymic, which are surnames derived from the father's given name, or metronymic, which are surnames derived from the mother's given name. The most common patronymic suffixes are ov or ev, which are used after words ending in a consonant, and in, which follows words ending in a vowel. The name Orlovski is derived from the Russian personal name Orlov, which is derived from the word Oryol or eagle. In the Middle Ages, the eagle was a symbol of royalty and power. The eagle is featured in the Russian Imperial insignia.