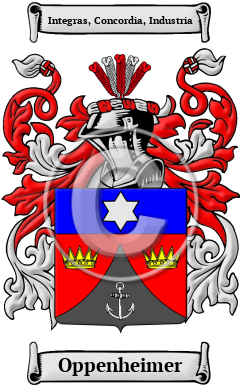 The ancient German region of the Rhineland was the original home of the name Oppenheimer. Oppenheimer was a local name, a type of hereditary surname that identified people by the places where they lived. Landowners were the first to use local names, often attaching the prefix "von", meaning "of" or "from", in some cases as a mark of aristocratic birth. Local names are by far the most common style of German hereditary surname. Oppenheimer was a name for someone who lived in the region of Oppenheim in the town of Hesse, between Mainz and Worms. Oppenheimer is a topographic surname, which was given to a person who resided near a physical feature such as a hill, stream, church, or type of tree. Habitation names form the other broad category of surnames that were derived from place-names. They were derived from pre-existing names for towns, villages, parishes, or farmsteads. Other local names are derived from the names of houses, manors, estates, regions, and entire counties.

Early Origins of the Oppenheimer family

The surname Oppenheimer was first found in the Rhineland, where the name Oppenheim was closely identified in early mediaeval times with the feudal society that became prominent throughout Europe. The name later emerged as a noble family with great influence, having many distinguished branches that become noted for their involvement in social, economic and political affairs.

Early History of the Oppenheimer family

This web page shows only a small excerpt of our Oppenheimer research. Another 82 words (6 lines of text) covering the year 1867 is included under the topic Early Oppenheimer History in all our PDF Extended History products and printed products wherever possible.

More information is included under the topic Early Oppenheimer Notables in all our PDF Extended History products and printed products wherever possible.

In the United States, the name Oppenheimer is the 16,792nd most popular surname with an estimated 2,487 people with that name. [1]

Oppenheimer migration to the United States +

Hundreds of thousands of Europeans, including many Rhinelanders, made the voyage to North America between the 17th and 20th centuries. It was an escape from religious persecution and poverty and also an opportunity for people to start over and own their own land. Most landed at Ellis Island, off New York before moving on to the states of Pennsylvania, Ohio, Texas, Illinois, and California. Some also landed in Canada and settled in Ontario, while others headed west to the prairie provinces. A study of passenger and immigration lists has shown a number of people bearing the name of Oppenheimer, or one of its variants, reaching North America shores very early:

Oppenheimer Settlers in United States in the 19th Century