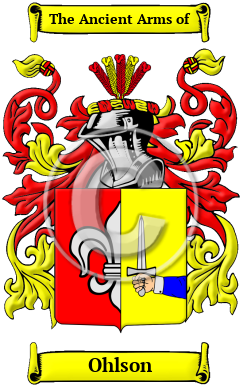 The origin of the distinguished Ohlson family can be traced to the historic Scandinavian country of Sweden. The surname Ohlson is derived from the Scandianavian personal name Oleifr, which also took the forms Olaf, Olof, and Olav. This name is composed of the elements ans, which means god, and leifr, which means relic. The suffix -sson and its variants are translatable as son of.

In the United States, the name Ohlson is the 17,631st most popular surname with an estimated 2,487 people with that name. [1]

Ohlson migration to the United States +

Ohlson Settlers in United States in the 19th Century