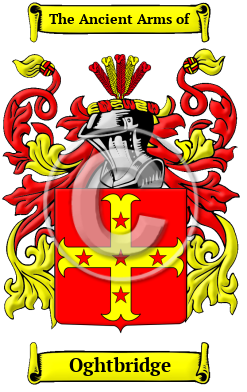 Early Origins of the Oghtbridge family

The surname Oghtbridge was first found in Suffolk where the surname is descended from the tenant Uthret, recorded in 1066 and again in the Domesday Book census of 1086.

However, some of the family were found at Towthorpe in the East Riding of Yorkshire in ancient times. "This place is said to have formerly had a village that was destroyed by fire, and to have been the seat of the ancient family of Ughtred." [1]

Early History of the Oghtbridge family

This web page shows only a small excerpt of our Oghtbridge research. Another 169 words (12 lines of text) covering the years 1358, 1509, 1512, 1523 and 1593 are included under the topic Early Oghtbridge History in all our PDF Extended History products and printed products wherever possible.

More information is included under the topic Early Oghtbridge Notables in all our PDF Extended History products and printed products wherever possible.

Migration of the Oghtbridge family