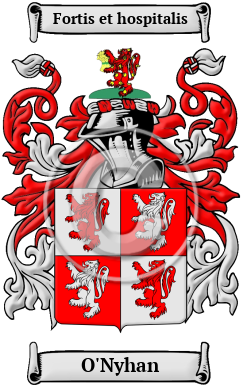 Early Origins of the O'Nyhan family

The surname O'Nyhan was first found in County Cork (Irish: Corcaigh) the ancient Kingdom of Deis Muin (Desmond), located on the southwest coast of Ireland in the province of Munster, where Neivin O'Nyhyn was charged with harboring felons in 1295. William O'Nyhyn appeared in another court case not much later.

Early History of the O'Nyhan family

This web page shows only a small excerpt of our O'Nyhan research. More information is included under the topic Early O'Nyhan History in all our PDF Extended History products and printed products wherever possible.

More information is included under the topic Early O'Nyhan Notables in all our PDF Extended History products and printed products wherever possible.

Migration of the O'Nyhan family

Some of the first settlers of this family name or some of its variants were: Daniel Nihen, who arrived in New York in 1833; Honora and Patrick Neehan, who landed in Boston in 1849; Ellen Nihan, who immigrated to New York in 1850.