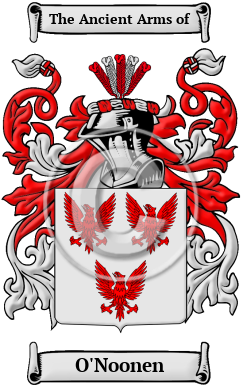 All Irish surnames have a unique and often romantic meaning. The name O'Noonen originally appeared in Gaelic as O Nuadhain. The original Gaelic form of the name was O hIonmhaineain, which was originally derived from "ionmhain," meaning "beloved."

Early Origins of the O'Noonen family

The surname O'Noonen was first found in County Cork (Irish: Corcaigh) the ancient Kingdom of Deis Muin (Desmond), located on the southwest coast of Ireland in the province of Munster, where they held a family seat from ancient times.

Early History of the O'Noonen family

This web page shows only a small excerpt of our O'Noonen research. Another 79 words (6 lines of text) covering the years 1172 and 1341 are included under the topic Early O'Noonen History in all our PDF Extended History products and printed products wherever possible.

Names written in official documents were generally spelt as they sounded, leading to the problem of one name being recorded under several different variations, creating the illusion in records of more than one person. Among the many spelling variations of the surname O'Noonen that are preserved in documents of the family history are Noonan, O'Nunan, O'Noonan, Nunan, Neenan and others.

More information is included under the topic Early O'Noonen Notables in all our PDF Extended History products and printed products wherever possible.

Migration of the O'Noonen family

The English-ruled Ireland of the late 18th and 19th centuries featured a rapidly increasing population and an agricultural-based economy. This combination proved to be disastrous in the 1840s after a couple of failed potato harvests. Thousands died of disease and starvation, and thousands more left the country, often bound for North America. Those that survived the journey to North America were put to work building the bridges, canals, roadways, and railways needed for the development of an industrial society. Those Irish, although often despised by those already established in North American cities and towns, played an instrumental role in making Canada and the United States the powerful and wealthy nations that they are today. An examination of early immigration and passenger lists has shown many immigrants bearing the name O'Noonen: James, John, and Patrick Nonan who arrived in Philadelphia between 1840 and 1870; Bartholomew, Cornelius, Daniel, Edward, John, Judy, Michael, Peter, and Thomas Noonan all arrived in Philadelphia between 1840 and 1870.