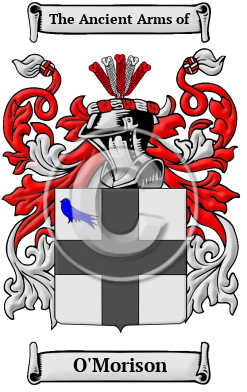 The surname O'Morison and its variants are phonetic interpretations of the Irish name O Muirgheasain. Over time, many of this name became known by the name Morrison; however the modern translation this Gaelic name is generally Bryson, and sometimes in County Mayo, Price. There is also an English surname Bryson, and no doubt some of them have emigrated to Ireland over the centuries.

Early Origins of the O'Morison family

The surname O'Morison was first found in Ulster (Irish: Ulaidh), in Counties Donegal and Derry, where it was first documented as Mrieson and other similar variants in the 17th century. O'Morison was listed in 1606 in County Donegal, as well as O'Mrisane in 1659, which was considered a principal name of the county by the census of that year. In the Diocese of Derry, Bishop Montgomery called the erenagh of Clonmany in Inishowen, Donatus O'Morison.

Early History of the O'Morison family

This web page shows only a small excerpt of our O'Morison research. More information is included under the topic Early O'Morison History in all our PDF Extended History products and printed products wherever possible.

More information is included under the topic Early O'Morison Notables in all our PDF Extended History products and printed products wherever possible.

Migration of the O'Morison family