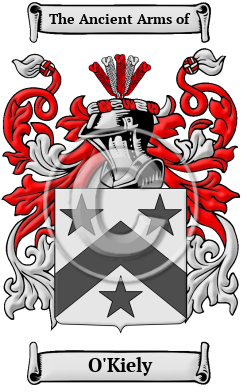 There are a multitude of ancient meanings and variations associated with the Irish surnames that are now common throughout the modern world. The original Gaelic form of the name O'Kiely is O Cadhla, which is derived from the word "cadhla," which means "graceful." [1]

Early Origins of the O'Kiely family

The surname O'Kiely was first found in County Waterford (Irish: Port Láirge), anciently the Deise region, on the South coast of Ireland in the Province of Munster, where they held a family seat from very ancient times. They are of the ancient kingdom of Ossory (Osraighe), conjecturally descended from the Kings and gentry of Ossory, the progenitor of which was Conla, the second son of Breasal Breac, King of Leinster, and descended to Ceallach who was ancestor of Teige McGillpatrick. [2]

Early History of the O'Kiely family

This web page shows only a small excerpt of our O'Kiely research. Another 152 words (11 lines of text) covering the years 1190, 1630, 1645, 1689 and 1863 are included under the topic Early O'Kiely History in all our PDF Extended History products and printed products wherever possible.

One must realize that attempting to record a Gaelic name in English was a daunting task. Even today the translation is a difficult one. Accordingly, spelling variations were the norm. Variations found include Keily, Keiley, Keilly, Kiley, Kily, Kiely, Kieley, Keeley, Keely, Queally, Quealy, Quelly, O'Keily, O'Keilly, O'Kiely and many more.

More information is included under the topic Early O'Kiely Notables in all our PDF Extended History products and printed products wherever possible.

Migration of the O'Kiely family

A great wave of Irish migration occurred during the 19th century as a direct result of English colonial rule and tight-fisted absentee landlords. Many of these Irish immigrants boarded passenger ships bound for North America. Those who migrated early enough were given land in either British North America or the United States; those who came in the late 19th century were typically employed in industrial centers as laborers. At whatever age they undertook the dangerous passage to North America, those Irish immigrants were essential to the speedy development of the two infant nations to which they arrived, whether they broke and settled land, helped build canals, bridges, and railroads, or produced products for consumer consumption. An examination of immigration and passenger lists has uncovered a large number of immigrants bearing the name O'Kiely or one of its variants: William Keeley who landed in America in 1765; Dennis and Ellen Keeley settled in Boston Massachusetts in 1849; Michael Keeley settled in Philadelphia, Pennsylvania in 1852.