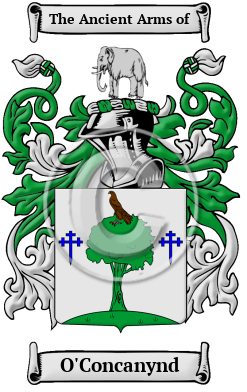 Gaelic, otherwise known as Early Modern Irish, was used in Ireland from around the year 1200 until the 18th century. It is from this language that we found the first references to the name O'Concanynd as O Concheanainn, possibly meaning "fair headed hound." The family descends from Cuceannan, who was killed in 991. Another reference, claims that the surname could have been derived from MacConceannain, and in this case it was derived from the Irish "conn," a man's personal name + "gan," which means without + "an," which means a "lie," collectively meaning "Conn the speaker of truth." [1]

Early Origins of the O'Concanynd family

The surname O'Concanynd was first found in Galway (Irish: Gaillimh) part of the province of Connacht, located on the west coast of the Island, and Roscommon where they claim descent from the Heremon kings, from the Ui Bruin and more specifically they were derived from Dermot, brother of Murias the 29th King of Connacht who was alive in the 9th century. They claim descendancy from the O'Connors, hence the similarity of the Coat of Arms which both depict a tree at the center point.

Early History of the O'Concanynd family

This web page shows only a small excerpt of our O'Concanynd research. Another 82 words (6 lines of text) covering the years 1640, 1690, 1749, 1732 and 1748 are included under the topic Early O'Concanynd History in all our PDF Extended History products and printed products wherever possible.

Before widespread literacy came to Ireland, a name was often recorded under several different variations during the life of its bearer. Accordingly, numerous spelling variations were revealed in the search for the origin of the name O'Concanynd family name. Variations found include Concannon, O'Concannon, Cancannon, Concanon, Cancanon, O'Concanon, Connon and many more.

Another 38 words (3 lines of text) are included under the topic Early O'Concanynd Notables in all our PDF Extended History products and printed products wherever possible.

Migration of the O'Concanynd family

To escape the religious and political discrimination they experienced primarily at the hands of the English, thousands of Irish left their homeland in the 19th century. These migrants typically settled in communities throughout the East Coast of North America, but also joined the wagon trains moving out to the Midwest. Ironically, when the American War of Independence began, many Irish settlers took the side of England, and at the war's conclusion moved north to Canada. These United Empire Loyalists, were granted land along the St. Lawrence River and the Niagara Peninsula. Other Irish immigrants settled in Newfoundland, the Ottawa Valley, New Brunswick and Nova Scotia. The greatest influx of Irish immigrants, however, came to North America during the Great Potato Famine of the late 1840s. Thousands left Ireland at this time for North America and Australia. Many of those numbers, however, did not live through the long sea passage. These Irish settlers to North America were immediately put to work building railroads, coal mines, bridges, and canals. Irish settlers made an inestimable contribution to the building of the New World. Early North American immigration records have revealed a number of people bearing the Irish name O'Concanynd or a variant listed above, including: Patrick Cancannon arrived in New York State in 1811; Michael Concannon who arrived in Philadelphia in 1878; Edward, George, James, Michael, Timothy, arrived in Philadelphia or Boston between 1840 or 1870.