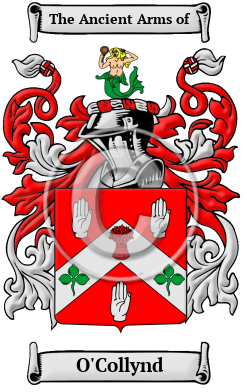 While many Irish names are familiar, their past incarnations are often shrouded in mystery, reflecting the ancient Gaelic heritage of their bearers. The original Gaelic form of the name O'Collynd is "Mac Cuilinn" or "O Cuilinn," which are from the word "cuileann," which means "holly." They descend from Heber, who with his brother Heremon ruled Ireland. [1]

Early Origins of the O'Collynd family

The surname O'Collynd was first found in the southeast of Ireland, in the counties of Dublin, Wicklow, and Wexford. Although all but one of the many distinct septs have become extinct, this remaining sept currently provides Ireland with nearly 8000 members, enough to make Cullen the 84th most common name in Ireland.

Early History of the O'Collynd family

Notable among the family name at this time was Patrick O'Cullen, (d. 1534), Bishop of Clogher (1517-1542.) He "was an Augustinian hermit and prior of St. John without Newgate in Dublin. He was appointed to the see of Clogher by Leo X on 11 Feb. 1516. In 1528 the Pope granted him a dispensation from residence on account of the poverty of his see, which had been so wasted in the wars that it was not...
Another 76 words (5 lines of text) are included under the topic Early O'Collynd Notables in all our PDF Extended History products and printed products wherever possible.

Migration of the O'Collynd family

Under the rule of England, land ownership in Ireland changed dramatically, and many native Irish families found themselves renting out land to farm from absentee owners. This was one of the prime reasons that immigration to North America began in the late 18th century: Irish farmers dreamed of owning their own parcel of land to work for themselves. At this point, the immigrants were at least of modest means for the passage across the Atlantic was often quite dear. In the 1840s the Great Potato Famine created an exodus of people of quite different means. These people were most often destitute: they either sold anything they had to gain a passage or they were sponsored by philanthropic societies. Many of these immigrants were sick from disease and starvation: as a result many did not survive the long transatlantic journey. Although those settlers that did survive were often despised and discriminated against by people already established in these nations, they were critical to rapid development of the powerful industrial nations of the United States and the country that would later become known as Canada. An examination of immigration and passenger lists shows many persons bearing the name of O'Collynd or one of its variants: Henry Cullen who settled in Boston Massachusetts in 1820; L. Cullen settled in Baltimore in 1820; Patrick Cullen settled in West New Jersey in 1772; the family also settled in New York and California in the 19th century. Popular Christian names of the settlers was Andrew, Bernerd, Charles, Daniel, Dennis, Edward, George, James, John, Michael, Owen, Patrick, Peter, Robert, Thomas, Walter, and William, and they settled mostly in Philadelphia between 1830 and 1870. William Cullen was a property owner in St. John's Newfoundland in 1794 and had been settled there for 17 years.