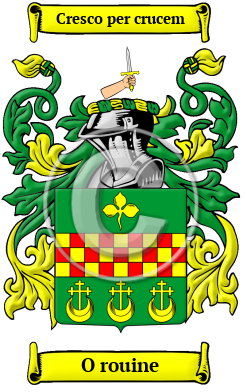 The surname O rouine was first found in East Galway (Irish: Gaillimh) part of the province of Connacht, located on the west coast of the Island, where they were a sept of the Ui Maine. The name is derived from the Irish and Gaelic Ruadhan (dh mute)-ruadh, which means red or red-haired. [1]

The progenitor of the O rouine family is Felix O'Ruadháin, Archbishop of Tuam, an Irish prelate at the Lateran Council in Rome in 1215. [2]

This web page shows only a small excerpt of our O rouine research. Another 82 words (6 lines of text) covering the years 1564, 1751 and 1834 are included under the topic Early O rouine History in all our PDF Extended History products and printed products wherever possible.

Another 29 words (2 lines of text) are included under the topic Early O rouine Notables in all our PDF Extended History products and printed products wherever possible.

Migration of the O rouine family to Ireland

Some of the O rouine family moved to Ireland, but this topic is not covered in this excerpt.
Another 34 words (2 lines of text) about their life in Ireland is included in all our PDF Extended History products and printed products wherever possible.

Migration of the O rouine family

Some of the first settlers of this family name or some of its variants were: Margaret Rown of Mountrath, Ireland, arrived at New York on June 1, 1816, aboard the Brig "Wilson"; James Rowan of Belfast, who arrived at Philadelphia on June 14 1816 aboard the Ship &quot.

Motto: Cresco per crucem
Motto Translation: I increase by the cross