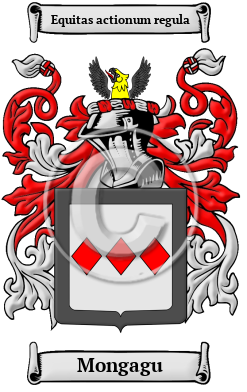 "The Christian name of the distinguished soldier was Drogo, denominated 'de Montagu,' from a town in Normandy. In Domesday Book, he is styled Drogo de Montacuto." [2]

Early Origins of the Mongagu family

The surname Mongagu was first found in Somerset. In the Domesday Book Drogo de Montacuto held lands under Robert, Earl of Morton and was one of the companions of the Conqueror in his quest to conquer England. As half-brother of the Conqueror, "this Drogo fixed his chief residence at the castle of Shipton-Montacute, co, Somerset. " [2]

Simon de Montacute, Lord of Shipton-Montacute was a strong warrior during the reign of Edward I, "a right valiant cheiftaine." "From this renowned soldier descended the illustrious race of Montague, conspicuous in all the great achievements of English history. " The parish of Montacute in Somerset holds a special significance to the family's lineage. "This place, in the time of the Saxons, was called Logaresburch, which is said to have been changed for its present name by William, Earl of Morton, who soon after the Conquest built a strong castle here, on the sharp point of a hill. " [3]

Early History of the Mongagu family

Anglo-Norman names are characterized by a multitude of spelling variations. When the Normans became the ruling people of England in the 11th century, they introduced a new language into a society where the main languages of Old and later Middle English had no definite spelling rules. These languages were more often spoken than written, so they blended freely with one another. Contributing to this mixing of tongues was the fact that medieval scribes spelled words according to sound, ensuring that a person's name would appear differently in nearly every document in which it was recorded. The name has been spelled Montague, Montagu, Montegue, Montacute and others.

Outstanding amongst the family at this time was John Montacute, (1350-1400), 3rd Earl of Salisbury and 5th and 2nd Baron Montacute, English nobleman, one of the few who remained loyal to Richard II after Henry IV became king; James Montagu, Bishop of Bath; Sir Edward Montagu (ca. 1485-1557), an English lawyer and judge; Sir Edward Montagu (ca. 1530-1602), an English landowner and politician who sat in the House of Commons in 1559; Edward Montagu, 1st Baron Montagu of Boughton (1563-1644), an English politician; Sir Henry Montagu, 1st Earl of Manchester (ca.1563-1642), an English...
Another 92 words (7 lines of text) are included under the topic Early Mongagu Notables in all our PDF Extended History products and printed products wherever possible.

Migration of the Mongagu family to Ireland

Some of the Mongagu family moved to Ireland, but this topic is not covered in this excerpt.
Another 57 words (4 lines of text) about their life in Ireland is included in all our PDF Extended History products and printed products wherever possible.

Migration of the Mongagu family

For many English families, the political and religious disarray that plagued their homeland made the frontiers of the New World an attractive prospect. Thousands migrated, aboard cramped disease-ridden ships. They arrived sick, poor, and hungry, but were welcomed in many cases with far greater opportunity than at home in England. Many of these hardy settlers went on to make important contributions to the emerging nations in which they landed. Among early immigrants bearing the name Mongagu or a variant listed above were: Thomas Montague settled in Virginia in 1690; Richard Montague settled in Boston in 1634; E. Montague settled in New York in 1822; Neil, Benjamin and Thomas Montegue all arrived in Philadelphia between 1840 and 1860..