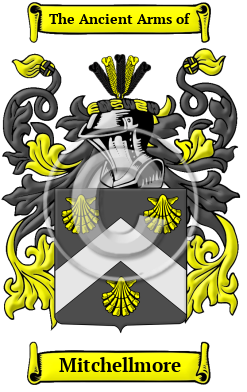 The distinguished surname Mitchellmore is one of the many names that first came to England in the wake of the Norman Conquest of 1066. The name is derived from the given name "Michel," meaning "who is like God." [1] One source notes of another possible origin: " Anglo-Saxon mycel, great, or mickle, would be a tolerably satisfactory etymon, and this may in some instances be the origin of the surname; but I think in most cases it is derived from Michael, a very popular baptismal name in many countries, through its French form, Michel." [2]

Early Origins of the Mitchellmore family

The surname Mitchellmore was first found in many places throughout ancient Britain. As if to underscore this claim, the following entries were found in the Hundredorum Rolls of 1273: Hugh filius Micahel in Lincolnshire; Roger Michel in Norfolk; and as a forename, Mikael de Brackele in London. Years later, the Yorkshire Poll Tax Rolls of 1379 listed the following: Johannes Michelson; Thomas Michilson and Adam Michelson. [3] the name was "distributed over England, but far more frequent in the south. Its home, par excellence, is in the county of Cornwall, where in nearly half the instances it is written Michell, though the pronunciation is the same. Its other homes are in Sussex, Wilts, and in the West Riding. Its prevalence in Cornwall is due to the fact that several parishes and places in the county bear the name of St. Michael in one form or another." [4]

Early History of the Mitchellmore family

This web page shows only a small excerpt of our Mitchellmore research. Another 136 words (10 lines of text) covering the years 1068, 1438, 1745, 1816 and are included under the topic Early Mitchellmore History in all our PDF Extended History products and printed products wherever possible.

Another 37 words (3 lines of text) are included under the topic Early Mitchellmore Notables in all our PDF Extended History products and printed products wherever possible.

Migration of the Mitchellmore family to Ireland

Some of the Mitchellmore family moved to Ireland, but this topic is not covered in this excerpt.
Another 79 words (6 lines of text) about their life in Ireland is included in all our PDF Extended History products and printed products wherever possible.

Migration of the Mitchellmore family