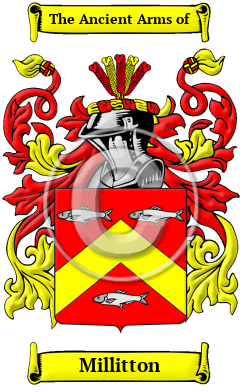 Early Origins of the Millitton family

The surname Millitton was first found in Cornwall at Pengersick Castle. Built in about 1510 by William Worth, the Militon family, originally from Devon, inherited (or otherwise acquired) Pengersick, and enlarged the building. "This mansion his family had their seat; but whether the building was erected by this purchaser, or it had been previously raised, seems rather uncertain. According to Hals, this Mr. Milliton having slain a man, either through accident or design, immured himself in some part of this castle to avoid justice, during the remaining part of his life. And so effectually was he secured, that he not only escaped detection, but was unknown to every one besides a few confidential friends, until death discovered his retreat. In the year 1547, Job Milliton, son of the above, was made governor of St. Michael's Mount, in the room of Humphrey Arundell, who was executed for rebellion." [1]

Early History of the Millitton family

This web page shows only a small excerpt of our Millitton research. Another 77 words (6 lines of text) covering the years 1455 and 1487 are included under the topic Early Millitton History in all our PDF Extended History products and printed products wherever possible.

More information is included under the topic Early Millitton Notables in all our PDF Extended History products and printed products wherever possible.

Migration of the Millitton family