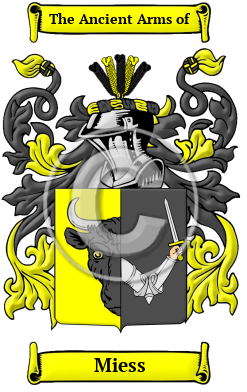 The German surname Miess emerged in the lands that formed the powerful German state of Prussia, which at one time was an immense German territory that stretched from France and the Low Countries to the Baltic sea and Poland. After the fall of the Roman Empire, the German territories were inhabited by a variety of barbarian tribes. The borders of the barbarian kingdoms changed frequently, but the region that became known as Prussia was roughly divided between the areas of Brandenburg-Prussia, West Prussia, and East Prussia. By the 19th century, Brandenburg-Prussia had incorporated East Prussia, West Prussia and many other German territories. Moreover, in the late 19th century, it led the German states in the unification of Germany.

Early Origins of the Miess family

The surname Miess was first found in Prussia, where the name could be considered to have made a great contribution to the feudal society which became the backbone of modern Europe. The name became prominent in local affairs, and branched into many houses which played important roles in the tribal and national conflicts, where each group sought power and status in an ever changing territorial profile.

Early History of the Miess family

This web page shows only a small excerpt of our Miess research. Another 106 words (8 lines of text) covering the year 1843 is included under the topic Early Miess History in all our PDF Extended History products and printed products wherever possible.

One can encounter great variation in the spelling of surnames: in early times, spelling in general, and thus the spelling of names was not yet standardized; and later, spellings would change with branching and movement of families. Variations of the name Miess include Meske, Meeske, Mieske, Mesec, Messec, Messeck, Meseck, Mesech, Messech, Mesac and many more.

More information is included under the topic Early Miess Notables in all our PDF Extended History products and printed products wherever possible.

Migration of the Miess family

Much of German history has been shaped by the state of Prussia. It was an enduring military power until after the Second World War. At that time, the state was abolished altogether and its land divided between the Soviet Union, Poland, East Germany and West Germany. While some Prussians were content to remain in those countries, others moved away, many of them migrating to North America. They entered the United States mostly through Philadelphia, moving on to Ohio, Texas, Illinois, California, New York, and Maryland. Others went to Canada, settling on the prairies and in the province of Ontario. Among those of this surname listed in various historical records were: August Meseck, who came to Texas with his wife Auguste in 1846.