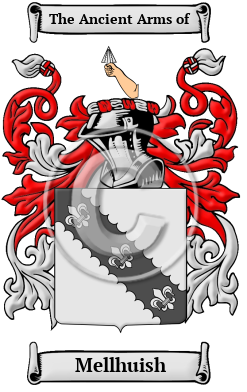 The illustrious surname Mellhuish finds its origin in the rocky, sea swept coastal area of southwestern England known as Cornwall. Although surnames were fairly widespread in medieval England, people were originally known only by a single name. The process by which hereditary surnames were adopted is extremely interesting. As populations grew, people began to assume an extra name to avoid confusion and to further identify themselves. Under the Feudal System of government, surnames evolved and they often reflected life on the manor and in the field. Lords and their tenants often became known by the name of the feudal territory they owned or lived on. Unlike most Celtic peoples, who favored patronymic names, the Cornish predominantly used local surnames. This was due to the heavy political and cultural influence of the English upon the Cornish People at the time that surnames first came into use. Local surnames were derived from where a person lived, held land, or was born. While many Cornish surnames of this sort appear to be topographic surnames, which were given to people who resided near physical features such as hills, streams, churches, or types of trees, many are actually habitation surnames derived from lost or unrecorded place names. The name Mellhuish is a local type of surname and the Mellhuish family lived in Melhuish in Devon. The surname Mellhuish is a habitation name that was originally derived from pre-existing names for towns, villages, parishes, or farmsteads. The surname originated as a means of identifying individuals from a particular area. In the Middle Ages people often assumed the name of the place that they originally lived as their surname during the course of travel.

Early Origins of the Mellhuish family

The surname Mellhuish was first found in Devon where they held a family seat from ancient times as Lords of the Manor of Melhuish in that shire, some say, well before the Norman Conquest of England in 1066 A.D. The original name of the village was Melewis. Conjecturally the family name is descended from Hugh of Rennes, holder of the village of Melhuish from Baldwin, Sheriff of Devon at the time of the taking of the Domesday Book Survey in 1086 A.D.

Early History of the Mellhuish family

Notable amongst the family at this time was John Melhuish, an English merchant and politician, Member of Parliament for Truro, Cornwall (1554 to 1555.) In 1554 Melhuish abandoned Parliament without a licence and evaded summons to the King's Bench. For three years...
Another 41 words (3 lines of text) are included under the topic Early Mellhuish Notables in all our PDF Extended History products and printed products wherever possible.

Migration of the Mellhuish family

An examination into the immigration and passenger lists has discovered a number of people bearing the name Mellhuish: Agnes Melhuish, a convict servant sent to Virginia in 1719; William Melhuish, who came to America in 1740; Mary Melhuish, who arrived in Philadelphia in 1819.