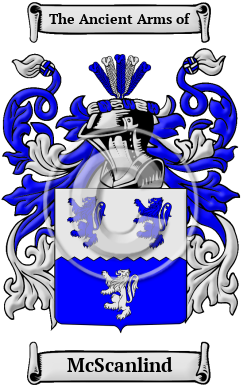 Today's Irish surnames are underpinned by a multitude of rich histories. The name McScanlind originally appeared in Gaelic as O Scannlain or Mac Scannlain, which are both derived from the word "scannal," which means "contention."

Early Origins of the McScanlind family

The surname McScanlind was first found in County Louth (Irish: Lú) the smallest county in Ireland, located on the East coast, in the Province of Leinster. "The Mac Scanlans were a sept of Louth, from whom the ancient locality of Bally Mac Scanlan took its name. The first of the family mentioned by D'Alton is Patrick O'Scanlan, who was made archbishop or Armagh in 1261. " [1] According to O'Hart, the family claim descent from the Heremon Kings of Ireland, more specifically through the O'Shaughnessey pedigree as Tuadan, brother of Duach was the ancestor of O'Scannla which is Anglicized as Scanlan. [2] However, MacLysaght claims that there are two quite distinct septs; the O Scannlain of Munster and MacScannlain of Louth. The latter claimed Bally Mac Scanlan (Ballymacscanlan) as their ancient homeland. He continues pointing out that there are six places names Ballymacscanlan throughout Ireland eluding to the family's widespread distribution. [3]

Early History of the McScanlind family

This web page shows only a small excerpt of our McScanlind research. Another 77 words (6 lines of text) covering the years 127 and 1272 are included under the topic Early McScanlind History in all our PDF Extended History products and printed products wherever possible.

People who were accounted for by scribes and church officials often had their name recorded many different ways because pronunciation was the only guide those scribes and church officials had to go by. This resulted in the problem of one person's name being recorded under several different variations, creating the illusion of more than one person. Among the many spelling variations of the surname McScanlind that are preserved in archival documents are Scanlan, O'Scannell, O'Scanlan, O'Scanlon, MacScanlan, Scanlin and many more.

More information is included under the topic Early McScanlind Notables in all our PDF Extended History products and printed products wherever possible.

Migration of the McScanlind family

Irish families left their homeland in astonishing numbers during the 19th century in search of a better life. Although individual reasons vary, most of these Irish families suffered from extreme poverty, lack of work opportunities, and exorbitant rents in their homeland. Many decided to travel to Australia or North America in the hopes of finding greater opportunities and land. The Irish immigrants that came to North America initially settled on the East Coast, often in major centers such as Boston or New York. But like the many other cultures to settle in North America, the Irish traveled to almost any region they felt held greater promise; as a result, many Irish with gold fever moved all the way out to the Pacific coast. Others before that time left for land along the St. Lawrence River and the Niagara Peninsula, or the Maritimes as United Empire Loyalists, for many Irish did choose to side with the English during the American War of Independence. The earliest wave of Irish migration, however, occurred during the Great Potato Famine of the 1840s. An examination of early immigration and passenger lists has revealed many people bearing the McScanlind name: Anne, Charles, Daniel, Denis, Edward, James, John, Michael, Patrick, Peter, Thomas, Timothy and William Scanlan, who all arrived in Philadelphia between 1800 and 1870.