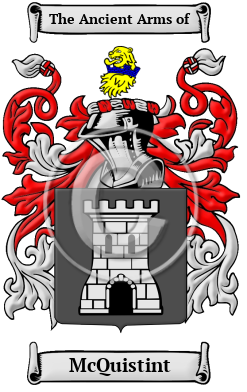 The story of the McQuistint family stretches back through time to the Viking settlers who populated the rugged shores of Scotland in the Medieval era. The name McQuistint was derived from Huchon, a diminutive form of Hugh. [1] Patronymic surnames arose out of the vernacular and religious given name traditions. This name is the equivalent of Hugh in the vernacular of Scotland. Today, the plural form of the name is more popular as in "Hutchins" or "Hutchens," but years ago the singular form was far more common.

Early Origins of the McQuistint family

The surname McQuistint was first found in Ross-shire (Gaelic: Siorrachd Rois), a former county now part of the Council Areas of Highland and Western Isles in Northern Scotland, which emerged from the Gaelic lordship of the Earl of Ross, where they held a family seat from very ancient times.

Early History of the McQuistint family

Standards used to judge the accuracy of spellings and translations did not yet exist in the Middle Ages. Spelling variations in names dating from that era, are thus, an extremely common occurrence. McQuistint has been recorded as Hutchins, Hutchings, Hutchin, Hutcheon, Huchens, Hutcheons, Hutchon, Houchin, Houchen, Houchens, MacCutcheon, MacQuestion and many more.

Notable amongst the Clan from early times was Edward Hutchins (1558?-1629), English divine, born about 1558 of poor parents, was, according to Wood, a native of Denbighshire. About 1576 he matriculated at Brasenose College, Oxford: he graduated B.A. 1577, and proceeded M.A. 1581 and B.D. 1590. [5] Sir George Hutchins (d. 1705), king's...
Another 52 words (4 lines of text) are included under the topic Early McQuistint Notables in all our PDF Extended History products and printed products wherever possible.

Migration of the McQuistint family to Ireland

Some of the McQuistint family moved to Ireland, but this topic is not covered in this excerpt.
Another 71 words (5 lines of text) about their life in Ireland is included in all our PDF Extended History products and printed products wherever possible.

Migration of the McQuistint family

The New World was far from the oppressive regime of the old country. It was a place where there was more land than people and political and religious freedom were far easier to come by. Many Scots even got the chance to fight for their freedom in the American War of Independence. In recent years, interest in this heritage has been generated by Clan societies and regular highland games in North America. An examination of early immigration and passenger lists has revealed many people bearing the McQuistint name: Jeremiah Houchin, who sailed to New England in 1630; Tobias Hutchins settled in St. John's, Newfoundland in 1682; George Hutchings was given an estate in St. John's Newfoundland in 1762.