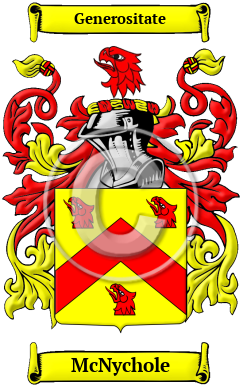 The story of the McNychole family stretches back through time to the Viking settlers who populated the rugged shores of Scotland in the Medieval era. The name McNychole was derived from from the personal name, Nicholas. McNychole is a patronymic surname, which belongs to the category of hereditary surnames. The surname McNychole arose out of the religious naming tradition. In Christian countries, the name Nicholas was popular, owing to the legends surrounding the 4th century Lycian bishop of that name. In Catholic countries in particular, this religious figure was revered. This accounts for its popularity as a surname in Scotland. The name Nicholas came from the Greek, Nikolaos, which means conqueror of the people. In Scotland, the earliest bearers of the surname McNychole lived on the Isle of Skye, which is located on the western coast.

Early Origins of the McNychole family

The surname McNychole was first found in on the Isle of Skye, where the first on record was Ottar Snaekollson who was the Chief of the MacNichols and attended the Council of Chiefs, held by MacDonald, Lord of the Isles, at Finlaggan on the Island of Islay about 1240. One of the first records of the name in Scotland was Maucolum fiz Nicol, who rendered homage to King Edward I of England in 1296 and the Nicholsons of Skye have Englished their name from Macnicol. [1]

Early History of the McNychole family

Spelling variations are extremely common among Scottish names dating from this era because the arts of spelling and translation were not yet standardized. Spelling was done by sound, and translation from Gaelic to English was generally quite careless. In different records, McNychole has been spelled MacNichol, MacNicol, MacNicoll, Nicolson, Nicholson, MacNicholas, MacNickle, MacNickel, MacNickell, MacNiccol, MacNychole and many more.

Notable amongst the Clan from early times was James Nicolson (d. 1607), Moderator of the General Assembly of the Church of Scotland & Bishop of Dunkeld; Thomas Joseph Nicolson (1645-1718), a Roman Catholic bishop, Vicar Apostolic of Scotland (1694-1718); William Nicolson (1655-1727)...
Another 41 words (3 lines of text) are included under the topic Early McNychole Notables in all our PDF Extended History products and printed products wherever possible.

Migration of the McNychole family to Ireland

Some of the McNychole family moved to Ireland, but this topic is not covered in this excerpt.
Another 57 words (4 lines of text) about their life in Ireland is included in all our PDF Extended History products and printed products wherever possible.

Migration of the McNychole family

Those who made the voyage were greeted with ample opportunity to acquire land and a political climate far away from the oppressive monarchy of the old country. They settled along the east coast of what would become Canada and the United States. In the American War of Independence, those who remained loyal to England traveled north to Canada as United Empire Loyalists. In this century, many Scots living in North America have begun to recover their rich heritage through festivals, highland games, and Clan societies. An examination of passenger and immigration lists has shown early immigrants bearing the name McNychole: Samuel Nicolson, who settled in New Jersey in 1664 with his wife Anne; Angus, Ann, Archibald, Jean, John, Robert, McNicol, who all arrived in Wilmington NC in 1774.