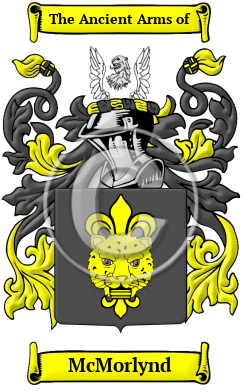 The ancient history of the McMorlynd name begins with the ancient Anglo-Saxon tribes of Britain. The name is derived from when the family resided on a moor, which is a tract of open, uncultivated ground which is usually grown over with heather and coarse grasses and has a poor, peaty soil. The surname McMorlynd literally means dweller by the moor-land. The surname McMorlynd belongs to the class of topographic surnames, which were given to people who resided near physical features such as hills, streams, churches, or types of trees.

Early Origins of the McMorlynd family

The surname McMorlynd was first found in Westmorland. The Mauley branch of the family claim Ugthorpe in the North Riding of Yorkshire as their ancient ancestral home. "This was an ancient demesne of the crown, and is styled in Domesday Book Ughetorp; the Mauleys became lords here at an early period, and from them the manor and estate descended by marriage to the Bigods, and afterwards to the Ratcliffes, by whom the whole was sold in parcels." [1]

Early History of the McMorlynd family

This web page shows only a small excerpt of our McMorlynd research. Another 164 words (12 lines of text) covering the years 1100, 1190, 1625, 1695, 1660, 1789 and are included under the topic Early McMorlynd History in all our PDF Extended History products and printed products wherever possible.

Until quite recently, the English language has lacked a definite system of spelling rules. Consequently, Anglo-Saxon surnames are characterized by a multitude of spelling variations. Changes in Anglo-Saxon names were influenced by the evolution of the English language, as it incorporated elements of French, Latin, and other languages. Although Medieval scribes and church officials recorded names as they sounded, so it is common to find one person referred to by several different spellings of his surname, even the most literate people varied the spelling of their own names. Variations of the name McMorlynd include Morland, Morley, Moorland, Morthland, Morlay and many more.

Notables of this surname at this time include: Sir Samuel Morland (1625-1695), notable English academic, diplomat, spy, inventor and mathematician, made 1st Baronet Morland in 1660; the...
Another 26 words (2 lines of text) are included under the topic Early McMorlynd Notables in all our PDF Extended History products and printed products wherever possible.

Migration of the McMorlynd family to Ireland

Some of the McMorlynd family moved to Ireland, but this topic is not covered in this excerpt.
Another 60 words (4 lines of text) about their life in Ireland is included in all our PDF Extended History products and printed products wherever possible.

Migration of the McMorlynd family

Searching for a better life, many English families migrated to British colonies. Unfortunately, the majority of them traveled under extremely harsh conditions: overcrowding on the ships caused the majority of the immigrants to arrive diseased, famished, and destitute from the long journey across the ocean. For those families that arrived safely, modest prosperity was attainable, and many went on to make invaluable contributions to the development of the cultures of the new colonies. Research into the origins of individual families in North America revealed records of the immigration of a number of people bearing the name McMorlynd or a variant listed above: Thomas Morland, who settled in Virginia in 1650; Ed Morland, who settled in Virginia in 1663; William Morland, who came to Boston in 1762; Eleanor Morland, a bonded passenger, who arrived in Virginia in 1774.