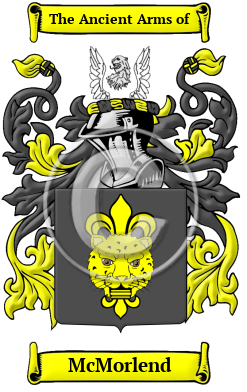 The name McMorlend is of Anglo-Saxon origin and came from when the family lived on a moor, which is a tract of open, uncultivated ground which is usually grown over with heather and coarse grasses and has a poor, peaty soil. The surname McMorlend literally means dweller by the moor-land. The surname McMorlend belongs to the class of topographic surnames, which were given to people who resided near physical features such as hills, streams, churches, or types of trees. [1]

Early Origins of the McMorlend family

The surname McMorlend was first found in Westmorland. The Mauley branch of the family claim Ugthorpe in the North Riding of Yorkshire as their ancient ancestral home. "This was an ancient demesne of the crown, and is styled in Domesday Book Ughetorp; the Mauleys became lords here at an early period, and from them the manor and estate descended by marriage to the Bigods, and afterwards to the Ratcliffes, by whom the whole was sold in parcels." [2]

Early History of the McMorlend family

This web page shows only a small excerpt of our McMorlend research. Another 164 words (12 lines of text) covering the years 1100, 1190, 1625, 1695, 1660, 1789 and are included under the topic Early McMorlend History in all our PDF Extended History products and printed products wherever possible.

It is only in the last few hundred years that the English language has been standardized. For that reason, early Anglo-Saxon surnames like McMorlend are characterized by many spelling variations. As the English language changed and incorporated elements of other European languages, even literate people changed the spelling of their names. Scribes and monks in the Middle Ages spelled names they sounded, so it is common to find several variations that refer to a single person. The variations of the name McMorlend include: Morland, Morley, Moorland, Morthland, Morlay and many more.

Notables of this surname at this time include: Sir Samuel Morland (1625-1695), notable English academic, diplomat, spy, inventor and mathematician, made 1st Baronet Morland in 1660; the...
Another 26 words (2 lines of text) are included under the topic Early McMorlend Notables in all our PDF Extended History products and printed products wherever possible.

Migration of the McMorlend family to Ireland

Some of the McMorlend family moved to Ireland, but this topic is not covered in this excerpt.
Another 60 words (4 lines of text) about their life in Ireland is included in all our PDF Extended History products and printed products wherever possible.

Migration of the McMorlend family

Many English families tired of political and religious strife left Britain for the new colonies in North America. Although the trip itself offered no relief - conditions on the ships were extremely cramped, and many travelers arrived diseased, starving, and destitute - these immigrants believed the opportunities that awaited them were worth the risks. Once in the colonies, many of the families did indeed prosper and, in turn, made significant contributions to the culture and economies of the growing colonies. An inquiry into the early roots of North American families has revealed a number of immigrants bearing the name McMorlend or a variant listed above: Thomas Morland, who settled in Virginia in 1650; Ed Morland, who settled in Virginia in 1663; William Morland, who came to Boston in 1762; Eleanor Morland, a bonded passenger, who arrived in Virginia in 1774.