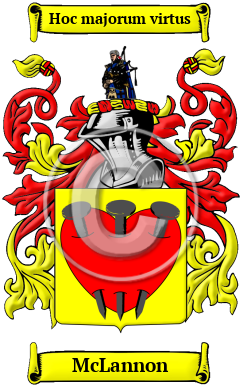 The McLannon surname is an Anglicized form of Gaelic Mac Gille Fhinneain, a patronymic name created from a Gaelic personal name "Fionnán," from the Gaelic "fionn," meaning "white."

Early Origins of the McLannon family

The surname McLannon was first found in Ayrshire where their history vitally is enmeshed with that of the larger Logan Clan. The McLannon spelling of this name was first found in Druimdeurfait, in Ross-shire, where they were a branch of the Highland Logans, who lived along Loch Lochy. According to family lore, they descend from Gilliegorm, Chief of the northern Logans, who was killed battling the Clan Fraser. His pregnant wife taken captive by Lord Lovat. Her son, born humped back, was called Crotair MacGilliegorm, the "crooked-back son of Gilliegorm." Fearing future revenge on the Frasers by the boy, he was sent to a monastery at Beauly, where he became a monk. He was said to be an ardent follower of the Irish Saint Fhinan, and one of his children took the name Mac Gillie Fhinan, which eventually became MacLennan.

Early History of the McLannon family

Spelling variations are a very common occurrence in records of early Scottish names. They result from the repeated and inaccurate translations that many names went through in the course of various English occupations of Scotland. McLannon has been spelled MacLennan, MacLenan, McLennan, McLennen and many more.

More information is included under the topic Early McLannon Notables in all our PDF Extended History products and printed products wherever possible.

Migration of the McLannon family to Ireland

Some of the McLannon family moved to Ireland, but this topic is not covered in this excerpt.
Another 61 words (4 lines of text) about their life in Ireland is included in all our PDF Extended History products and printed products wherever possible.

These settlers arrived in North America at a time when the east was burgeoning with prosperous colonies and the expanses of the west were just being opened up. The American War of Independence was also imminent. Some Scots stayed to fight for a new country, while others who remained loyal went north as United Empire Loyalists. The ancestors of all of them went on to rediscover their heritage in the 20th century through highland games and other patriotic Scottish events. The McLannon were among these contributors, for they have been located in early North American records:

McLannon Settlers in Canada in the 18th Century