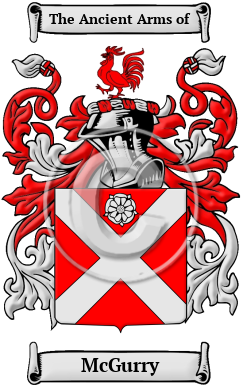 The Strathclyde-Briton people of ancient Scotland were the first to use the name McGurry. The McGurry family lived the place named Currie, derived from Gaelic curraigh, in Midlothian, on record since 1230. Some instances of this name in Scotland are also known to have derived the place name Corrie in Dumfriesshire.

Early Origins of the McGurry family

The surname McGurry was first found in Midlothian, where "Philip de Curry granted the lands of Dalhengun and Bargower in Kyle to the Abbey of Melrose, 1179. About 1210 Peter de Curri witnessed a charter by Malcolm Loccard, and John Curry of Scotland is mentioned in an Annandale charter, 1238." [1]

In England, Dodda æt Curi was listed as an Old English Byname in Somerset c1075; and Richard de Cury was listed in Somerset in 1212. [2] Curry, Curry-Mallet, North Curry and Curry-Rivell are all found in Somerset. It is thought that North Curry is the oldest as "this place appears to have been known to the Romans, an urn containing a quantity of silver coins of that people having been discovered in 1748: it was subsequently held by the Saxon kings, and retained in demesne by the Conqueror." [3]

Later records show Robert atte Curie in the Subsidy Rolls for Sussex in 1327. [2]

Early History of the McGurry family

Medieval Scottish names are rife with spelling variations. This is due to the fact that scribes in that era spelled according to the sound of words, rather than any set of rules. McGurry has been spelled Currie, Curry, Currey and others.

Notable amongst the family at this time was Sir Frederick Currie (1799-1875), Indian official, third son of Mark Currie of Cobham, Surrey, by Elizabeth, daughter of John Close of Easby, Yorkshire, was born on 3 Feb. 1799. He was educated at Charterhouse and the East India Company's College...
Another 48 words (3 lines of text) are included under the topic Early McGurry Notables in all our PDF Extended History products and printed products wherever possible.

Migration of the McGurry family to Ireland

Some of the McGurry family moved to Ireland, but this topic is not covered in this excerpt.
Another 202 words (14 lines of text) about their life in Ireland is included in all our PDF Extended History products and printed products wherever possible.

Migration of the McGurry family

Many Scots were left with few options other than to leave their homeland for the colonies across the Atlantic. Some of these families fought to defend their newfound freedom in the American War of Independence. Others went north to Canada as United Empire Loyalists. The ancestors of all of these families have recently been able to rediscover their roots through Clan societies and other Scottish organizations. Among them: Charles Currey who settled in Philadelphia in 1851; James Currey settled in St. Christopher in 1716; William and his wife settled in Alexandria Vermont in 1822 with seven children.