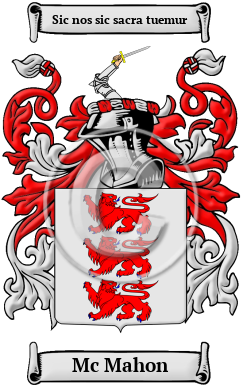 In its ancient Gaelic form, the Irish name Mc Mahon was written Mac Mathghamhna, which later became Mac Mathuna. Both names are derived from the word "mathghamhan," which means "bear."

The surname Mc Mahon was first found in County Clare (Irish: An Clár) located on the west coast of Ireland in the province of Munster, where the MacMahons were lords of Corca Baisgin; and possessed the greater part of the baronies of Moyarta and Clonderlaw. [1]

Many variations of the name Mc Mahon were found in archives from the Middle Ages. Names during the Middle Ages were typically recorded as they sounded and in many cases, one's surname spelling changed with each record.The spelling and language in which the people's names were recorded was often up to the individual scribe. Variations of the name Mc Mahon found include MacMahon, MacMann, MacMahan, MacMohan and others.

Notable amongst the family name at this time was Séamus mac Pilib Mac Mathghamhna (died 1519), was Bishop of Derry. Hugh Oge MacMahon (1606-1644), was an Irish conspirator, was probably of Sir Brian MacHugh Oge MacMahon, Lord of the Dartree in the county of Monaghan. Herber MacMahon (1600-1650), Bishop of Clogher in 1643, a Catholic leader, commanded the Ulster...
Another 59 words (4 lines of text) are included under the topic Early Mc Mahon Notables in all our PDF Extended History products and printed products wherever possible.

Irish families fled the English-colonized Ireland in record numbers during the 19th century for North America. Many of those destitute families died from disease during, and even shortly after, the long journey. Although those that immigrated before the Great Potato Famine of the 1840s often were granted a tract of land, those that arrived later were generally accommodated in urban centers or in work camps. Those in the urban centers would labor in the manufacturing sector, whereas those in work camps would to build critical infrastructures such as bridges, canals, roads, and railways. Regardless of when these Irish immigrants came to North America, they were critical for the rapid development of the young nations of the United States and Canada. Early immigration and passenger lists have recorded many early immigrants bearing the name of Mc Mahon:

Mc Mahon Settlers in United States in the 18th Century

Mc Mahon Settlers in United States in the 19th Century

Mc Mahon Settlers in Canada in the 18th Century

Mc Mahon Settlers in Canada in the 19th Century

Mc Mahon Settlers in Australia in the 19th Century

Mc Mahon Settlers in New Zealand in the 19th Century