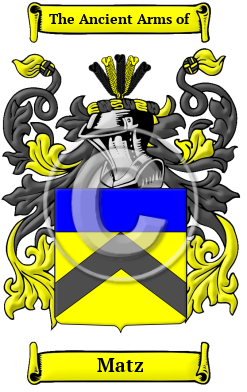 The German surname Matz emerged in the lands that formed the powerful German state of Prussia, which at one time was an immense territory that stretched from France and the Low Countries to the Baltic sea and Poland. After the fall of the Roman Empire, the German territories were inhabited by a variety of barbarian tribes. The borders of the barbarian kingdoms changed frequently, but the region that became known as Prussia was roughly divided between the areas of Brandenburg-Prussia, West Prussia, and East Prussia. By the 19th century, Brandenburg-Prussia had incorporated East Prussia, West Prussia and many other German territories. Moreover, in the late 19th century, it led the German states in the unification of Germany.

Early Origins of the Matz family

The surname Matz was first found in Prussia, where the family contributed greatly to the development of an emerging nation, and would later play a large role in the tribal and national conflicts of the area. The name stems from two sources which were continually mixed up throughout the Middle Ages, so they can no longer be differentiated: one was Matthaeus the Evangelist, who was patron saint of tax collectors, and the other was Mattias (Hebrew for "gift of the gods",) who was one of the twelve Apostles. In later years the name branched into many houses, each playing a significant role in local social and political affairs.

Early History of the Matz family

One can encounter great variation in the spelling of surnames: in early times, spelling in general, and thus the spelling of names was not yet standardized; and later, spellings would change with branching and movement of families. Variations of the name Matz include Mathias, Matthias, Mathius, Matthius, Matheus, Mathesius, Matheson, Matthisson, Mathies, Mathiessen, Thiessen and many more.

Notable figures of the time with the name Matz were Johannes Mathesius (1504-1565), who was a friend and disciple of Martin Luther. He is the author of the first biography of Luther, and himself wrote hymns and sermons. Johann Mattheson (1681-1764) was a musician and translator and produced the first German imitation of "The Spectator.&quot...
Another 54 words (4 lines of text) are included under the topic Early Matz Notables in all our PDF Extended History products and printed products wherever possible.

In the United States, the name Matz is the 7,140th most popular surname with an estimated 4,974 people with that name. [1]

Matz migration to the United States +

Matz Settlers in United States in the 18th Century

Matz Settlers in United States in the 19th Century