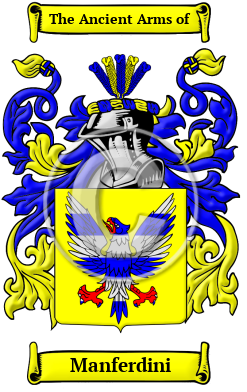 Early Origins of the Manferdini family

The surname Manferdini was first found in Padua (Italian: Padova, Latin: Patavium, Venetian: Padoa), on the Bacchiglione River, capital of the province of Padua. In 1175, the citizens elected the D'Este family as podesta but in 1275 Frederick II took over. The powerful families of D'Este, Camposampiero and Da Romano were the large influences. The city is rich in art, museums and galleries. Many churches exhibit works of the masters. In those ancient times only persons of rank, the podesta, clergy, city officials, army officers, artists, landowners were entered into the records. To be recorded at this time, at the beginning of recorded history, was of itself a great distinction and indicative of noble ancestry.

Early History of the Manferdini family

Migration of the Manferdini family

Some of the first settlers of this family name or some of its variants were: Math. Ferdinand Manfredi, who came to Alabama in 1827; and ??? Manfredo, who came to Puerto Rico in 1859.