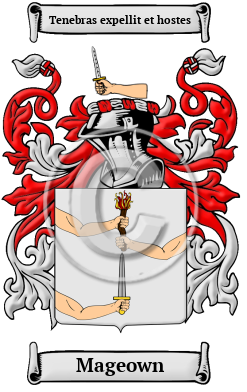 The Mageown surname derives from the Irish Gaelic name Mac an Ghabhain, which means "son of the blacksmith." As such, the name was probably originally occupational. It has often appeared in its Anglicized form Smith.

Early Origins of the Mageown family

The surname Mageown was first found in County Cavan, where they were recorded as a family of great antiquity. The Irish name MacGowan (not to be confused with the Scottish, which roots from MacGoun) is most often hidden under the ubiquitous name Smith. In Irish, the name is Mac an Ghabhain, which means 'son of the blacksmith'; thus its translation to Smith. In England, Horsington Manor in Somerset was owned by the Gowens family from sometime in the 1500s through 1653 when it was sold.

Early History of the Mageown family

This web page shows only a small excerpt of our Mageown research. Another 85 words (6 lines of text) covering the years 165 and 1659 are included under the topic Early Mageown History in all our PDF Extended History products and printed products wherever possible.

More information is included under the topic Early Mageown Notables in all our PDF Extended History products and printed products wherever possible.

Migration of the Mageown family

Some of the first settlers of this family name or some of its variants were: Archibald McGowan, who arrived with his children Duncan, John and Margaret in New York in 1739; Patrick MacGowan, who arrived in Boston, Massachusetts in 1764. Charles, Daniel, Edward, James, John, Mark, Michael, Patrick, Peter, Roger, Thomas, and William MacGowan all arrived in Philadelphia, Pennsylvania between 1840 and 1860.

Motto: Tenebras expellit et hostes
Motto Translation: He drives forth the darkness and the foe.