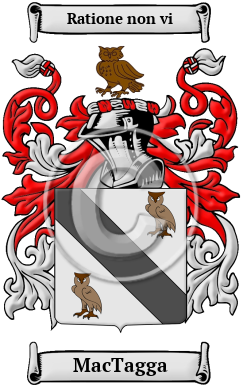 The MacTagga surname is an Anglicized form of the Gaelic name Mac an t-Sagairt, which means "son of the priest." [1]

Early Origins of the MacTagga family

The surname MacTagga was first found in Ross-shire (Gaelic: Siorrachd Rois) a former county, now part of the Council Areas of Highland and Western Isles in Northern Scotland, which emerged from the Gaelic lordship of the Earl of Ross. One of the first on record was Ferchar, son of the Red Priest of Applecross in Ross. He was knighted by King Alexander of Scotland in 1215 for his assistance in subduing the rebellious clans of Moray. He eventually became the Earl of Ross. [1]

Early History of the MacTagga family

Notable amongst the Clan at this time was Sir John McTaggart, 1st Baronet (1789-1867), a Scottish Liberal MP in the British Parliament who represented Wigtown Burghs (1835-1857) and was created a Baronet in 1841. The...
Another 35 words (2 lines of text) are included under the topic Early MacTagga Notables in all our PDF Extended History products and printed products wherever possible.

Migration of the MacTagga family