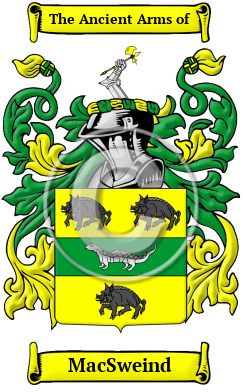 Irish names tend to vary widely in their spelling and overall form. The original Gaelic form of the name MacSweind is Mac Suibhne, which is derived from the word "suibhne," which means "pleasant."

Early Origins of the MacSweind family

The surname MacSweind was first found in County Donegal (Irish: Dún na nGall), northwest Ireland in the province of Ulster, sometimes referred to as County Tyrconnel. The name is derived from Suibhne O'Neill, who was a chieftain in Argyll, Scotland. His descendants migrated to Ireland as gallowglasses (mercenaries) prior to 1267. The three great septs of this name finally established themselves in Tirconnell in 14th century; they were known as MacSweeney Fanad, MacSweeney Banagh, and MacSweeney na dTuath, who were commonly referred to as 'MacSweeney of the Battleaxes.' They later became attached to the MacCarthys in the south and acquired their own territories and castles in Muskerry in County Cork.

Early History of the MacSweind family

This web page shows only a small excerpt of our MacSweind research. Another 69 words (5 lines of text) covering the years 1299 and 1310 are included under the topic Early MacSweind History in all our PDF Extended History products and printed products wherever possible.

Names from the Middle Ages demonstrate many spelling variations. This is because the recording scribe or church official often decided as to how a person's name was spelt and in what language. Research into the name MacSweind revealed many variations, including MacSweeney, MacSweeny, MacSwine, MacSwiney, MacSwyne, MacSwyny, MacWhinney, MacWhinny, MacWhinnie, MacSwiny, McSweeney, Swiney, Swinney and many more.

Prominent amongst the family at this time was John MacSween, a 13th-14th century nobleman who lost his lands in Scotland after the defeat of the forces and death of Alexander Og MacDonald, Lord of Islay in 1299. In...
Another 37 words (3 lines of text) are included under the topic Early MacSweind Notables in all our PDF Extended History products and printed products wherever possible.

Migration of the MacSweind family

To escape the religious and political discrimination they experienced primarily at the hands of the English, thousands of Irish left their homeland in the 19th century. These migrants typically settled in communities throughout the East Coast of North America, but also joined the wagon trains moving out to the Midwest. Ironically, when the American War of Independence began, many Irish settlers took the side of England, and at the war's conclusion moved north to Canada. These United Empire Loyalists, were granted land along the St. Lawrence River and the Niagara Peninsula. Other Irish immigrants settled in Newfoundland, the Ottawa Valley, New Brunswick and Nova Scotia. The greatest influx of Irish immigrants, however, came to North America during the Great Potato Famine of the late 1840s. Thousands left Ireland at this time for North America and Australia. Many of those numbers, however, did not live through the long sea passage. These Irish settlers to North America were immediately put to work building railroads, coal mines, bridges, and canals. Irish settlers made an inestimable contribution to the building of the New World. Early North American immigration records have revealed a number of people bearing the Irish name MacSweind or a variant listed above, including: Adam Sweeney, who settled in New York, NY in 1805; Alexander Sweeney, who came to Boston in 1768; Biddy Sweeney, who arrived in St. John, N.B. aboard the Brig Ambassador in 1834.