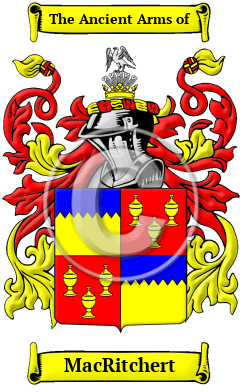 The MacRitchert surname came to Ireland with the Anglo-Norman invasion of the 12th century, led by the forces of Strongbow. The surname came from a common occupational name for a wine steward or the chief servant of a medieval household. In royal households, the title denoted a high-ranking officer whose duties as a wine steward were merely nominal. Occupational surnames, such as MacRitchert were much quite common to the Anglo-Norman culture, and virtually unknown in Gaelic Irish. The prefix le, meaning the, in French was often used by the early Strongbownians to link a person's first and name and surname. Eventually these prefixes were dropped or became fused onto the beginning of the surname. The surname MacRitchert is derived from Anglo-French "butuiller," which comes from the Old French word "bouteillier." These words are ultimately derived from the Latin words "buticularius," and "buticula," which mean "bottle." The Gaelic form of the surname MacRitchert is de Buitléir.

Early Origins of the MacRitchert family

The surname MacRitchert was first found in the ancient territory of Ormond (now parts of County Kilkenny, Wexford and north Tipperary). The first on record was Theobald FitzWalter, a distinguished Norman noble who accompanied Strongbow and was created the Chief Butler of Ireland in 1177. "He also possessed the barony of Amounderness, Lancashire, which he held in 1165 by service of one knight." [1]

Early History of the MacRitchert family

Medieval scribes and church officials spelled the names as they sounded, so a name was often spelled many different ways during the lifetime of a single person. The investigation of the origin of the name MacRitchert revealed many spelling variations including Butler, Buttler, McRichard and others.

Notable amongst the family up to this time was James Butler, 3rd Earl of Ormond (1359-1405), noble in the Peerage of Ireland, title was Governer of Ireland, acceded to the title in 1382 and built Gowran Castle three years later making it his usual residence, purchased Kilkenny Castle (1391) by deed from Sir Hugh le Despencer, Earl of Gloucester and Isabel his wife, daughter of Gilbert de Clare, built the castle of Dunfert (also called Danefort) and in 1386 founded a Friary of minorities at Ailesbury in Buckinghamshire, deputy to Sir Philip deCourtenay the then Lieutenant of Ireland (1384), appointed Lord...
Another 177 words (13 lines of text) are included under the topic Early MacRitchert Notables in all our PDF Extended History products and printed products wherever possible.

Migration of the MacRitchert family

In the mid-19th century, Ireland experienced one of the worst periods in its entire history. During this decade in order to ease the pressure of the soil, which was actually depleted by the effects of the previous years' grain crops, landowners forced tenant farmers and peasants onto tiny plots of land that barely provided the basic sustenance a family required. Conditions were worsened, though, by the population of the country, which was growing fast to roughly eight million. So when the Great Potato Famine of the mid-1840s hit, starvation and diseases decimated the population. Thousands of Irish families left the country for British North America and the United States. The new immigrants were often accommodated either in the opening western frontiers or as cheap unskilled labor in the established centers. In early passenger and immigration lists there are many immigrants bearing the name MacRitchert: Christopher Butler who settled in Virginia in 1670; the following, Charles, Daniel, Edward, Elizabeth, George, Giles, James, John, Joseph, Martin, Michael, Patrick, Richard, Thomas and William, all arrived in Philadelphia between 1840 and 1860.