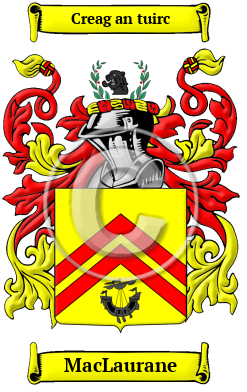 The age-old Hebrides islands and the west coast of Scotland are the ancestral home of the MacLaurane family. Their name comes from the personal name Laurence. The Gaelic form of the name is Mac Labhruinn, which means son of Labhran or son of Laurence. The Clan is believed to be descended from Lorn, son of Erc, who landed in Argyll in 503 AD. Although the lineage before the 12th century is difficult to prove, it has been established that the clan held vast territories called the Braes of Balquhidder. They were recorded as being 'all grand, strong men' and, when the Old Kirk at Balquhidder was being repaired, clan members supervised the exhumation of some of the bodies of ancient members of the clan from the graveyard that was a traditional the burial place of the theirs. They found bones measuring 23 and a half inches long, which makes them big men even by today's standards.

Early Origins of the MacLaurane family

The surname MacLaurane was first found in Argyllshire (Gaelic erra Ghaidheal), the region of western Scotland corresponding roughly with the ancient Kingdom of Dál Riata, in the Strathclyde region of Scotland, now part of the Council Area of Argyll and Bute, where in the valley of Loch Voil between the head of Loch Lomond and Loch Earn they were so powerful that it was once said that no one could take his place in church until the MacLaren Clan were properly seated.

Early History of the MacLaurane family

This web page shows only a small excerpt of our MacLaurane research. Another 312 words (22 lines of text) covering the years 1344, 1698, 1745 and are included under the topic Early MacLaurane History in all our PDF Extended History products and printed products wherever possible.

Medieval spelling was at best an intuitive process, and translation between Gaelic and English was no more effective. These factors caused an enormous number of spelling variations in Dalriadan names. In fact, it was not uncommon to see a father and son who spelled their name differently. Over the years, MacLaurane has been spelled MacLaren, MacLaron, MacLaurin, MacLarty, MacClarence, MacPhater, MacFeeter and many more.

More information is included under the topic Early MacLaurane Notables in all our PDF Extended History products and printed products wherever possible.

Migration of the MacLaurane family to Ireland

Some of the MacLaurane family moved to Ireland, but this topic is not covered in this excerpt.
Another 78 words (6 lines of text) about their life in Ireland is included in all our PDF Extended History products and printed products wherever possible.

Migration of the MacLaurane family

Scottish settlers arrived in many of the communities that became the backbones of the United States and Canada. Many stayed, but some headed west for the endless open country of the prairies. In the American War of Independence, many Scots who remained loyal to England re-settled in Canada as United Empire Loyalists. Scots across North America were able to recover much of their lost heritage in the 20th century as Clan societies and highland games sprang up across North America. Early immigration and passenger lists have documented some of the first MacLauranes to arrive on North American shores: John and Patrick McLaren who settled in South Carolina in 1716; Archibald McLaren settled in Savannah in 1821; Daniel, David, James, John, Lawrence, and Peter McLaren all arrived in Philadelphia, Pennsylvania between 1840 and 1860.