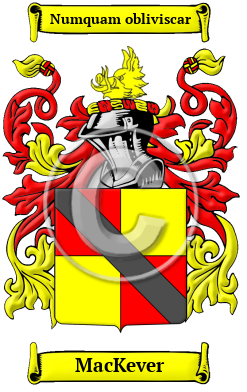 The MacKever surname is thought to have derived from an Old Norse personal name Ivarr of uncertain origin. It became a given name in Ireland, Scotland and Wales before becoming a hereditary surname.

Early Origins of the MacKever family

The surname MacKever was first found in Dumbartonshire. The first on record was "Douenaldus filius Makbeth mac Ywar was one of the perambulators of the boundary between the lands of Arnbroath Abbey and the barony of Kynblathmund, 1219." [1]

Early History of the MacKever family

Another 39 words (3 lines of text) are included under the topic Early MacKever Notables in all our PDF Extended History products and printed products wherever possible.

Migration of the MacKever family to Ireland

Some of the MacKever family moved to Ireland, but this topic is not covered in this excerpt.
Another 81 words (6 lines of text) about their life in Ireland is included in all our PDF Extended History products and printed products wherever possible.

MacKever migration to the United States +

MacKever Settlers in United States in the 19th Century