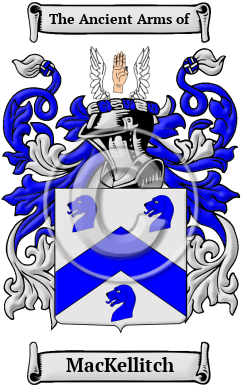 The rich saga of the MacKellitch family begins in ancient Scotland among the clans of the Boernician tribe. They lived in Aberdeen (part of the modern Grampian region.) 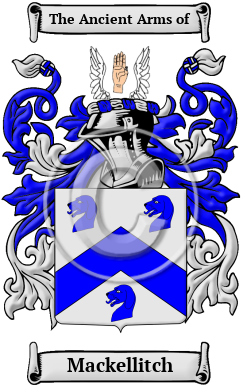 Early Origins of the MacKellitch family

The surname MacKellitch was first found in Aberdeenshire (Gaelic: Siorrachd Obar Dheathain), a historic county, and present day Council Area of Aberdeen, located in the Grampian region of northeastern Scotland. More recently, leading seamen in the Commonwealth Navies addressed as "leader", and informally known as "kellicks" from the killick anchor which is the symbol of their rank.

Early History of the MacKellitch family

This web page shows only a small excerpt of our MacKellitch research. Another 80 words (6 lines of text) covering the years 137 and 1372 are included under the topic Early MacKellitch History in all our PDF Extended History products and printed products wherever possible.

In the many years before the invention of the printing press and the first dictionaries, names and other words were spelled according to sound, often differently with each person who wrote them. Spelling variations of MacKellitch include Kellogg, Kellock, Kelloch, Kellog, Kellogh, MacKelloch, MacKellock and many more.

More information is included under the topic Early MacKellitch Notables in all our PDF Extended History products and printed products wherever possible.

Migration of the MacKellitch family to Ireland

Some of the MacKellitch family moved to Ireland, but this topic is not covered in this excerpt. More information about their life in Ireland is included in all our PDF Extended History products and printed products wherever possible.

Migration of the MacKellitch family

In many cases, the ancestors of many of these Boernician-Scottish people are just now learning of their Scottish heritage. Since the trip was so arduous, and many were fleeing from poverty itself, settlers brought little with them and often had nothing of their personal history to hand down to their children. Clan societies and highland games have helped to correct this problem in the 20th century. Early immigration records have shown some of the first MacKellitchs to arrive on North American shores: James Kellock, who was a servant, who arrived in Virginia in 1661; Alice Kellogg, who came to Hartford, CT in 1637; Daniel Kellogg, who arrived in Connecticut in 1651.