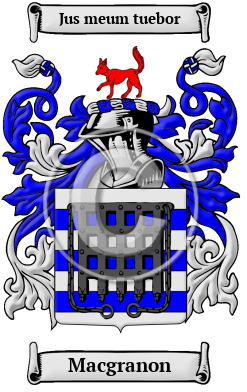 Macgranon is an ancient Norman name that arrived in England after the Norman Conquest of 1066. The name Macgranon comes from the Norman given name Reginald or Regenweald, meaning brave councilor, which is an alteration of the Old French name Reinold. "Several tenants in chief in Domesday [Book] are called Rainaldus. Reynell, Reynard, Reynardson, Rennal." [1]

Early Origins of the Macgranon family

The surname Macgranon was first found in Somerset where they were granted lands by William the Conqueror after the Norman Conquest of England in 1066. Early records of the name mention Willemus filius Raunaldi who was listed in the Domesday Book of 1086. Walter Reynolds (died 1327) was Bishop of Worcester, Archbishop of Canterbury (1313-1327), Lord High Treasurer and Lord Chancellor. [3]

Early History of the Macgranon family

Anglo-Norman names are characterized by a multitude of spelling variations. When the Normans became the ruling people of England in the 11th century, they introduced a new language into a society where the main languages of Old and later Middle English had no definite spelling rules. These languages were more often spoken than written, so they blended freely with one another. Contributing to this mixing of tongues was the fact that medieval scribes spelled words according to sound, ensuring that a person's name would appear differently in nearly every document in which it was recorded. The name has been spelled Reynell, Reynolds, Reynold, Reynalds, Reynell, Renaud, Renaut, Renouf, Rennard, Renals, Rennell, Rennels and many more.

Outstanding amongst the family at this time was Walter Reynolds (d. 1327) the son of a Windsor baker, who became a favorite of King Edward II, Archbishop of Canterbury (1313-1327); John Reynolds (c. 1588-c. 1655), an English merchant and writer from Exeter, produced a series of violent stories around marriage, adultery and murder as well as some political writings that caused him to be imprisoned. John Reynolds or Rainolds (1549-1607), was English president of Corpus Christi College, Oxford, and dean of Lincoln, born at Pinhoe, near Exeter. William Reinolds (c. 1544-1594), was an English Roman Catholic divine, second son of Richard Rainolds...
Another 152 words (11 lines of text) are included under the topic Early Macgranon Notables in all our PDF Extended History products and printed products wherever possible.

Migration of the Macgranon family to Ireland

Some of the Macgranon family moved to Ireland, but this topic is not covered in this excerpt.
Another 59 words (4 lines of text) about their life in Ireland is included in all our PDF Extended History products and printed products wherever possible.

Migration of the Macgranon family

For many English families, the political and religious disarray that plagued their homeland made the frontiers of the New World an attractive prospect. Thousands migrated, aboard cramped disease-ridden ships. They arrived sick, poor, and hungry, but were welcomed in many cases with far greater opportunity than at home in England. Many of these hardy settlers went on to make important contributions to the emerging nations in which they landed. Among early immigrants bearing the name Macgranon or a variant listed above were: Henry, Samuel, Thomas Reynold settled in Barbados in 1688; Christopher Reynolds settled in Virginia in 1622; Nathaniel Reynold settled in Salem in 1630.