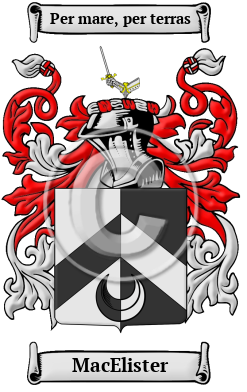 In the mountains of Scotland's west coast and on the Hebrides islands, the ancestors of the MacElister family were born. Their name comes from the given name Alexander, which in turn was originally derived from the Greek name, which means defender of men. In the late 11th century, Queen Margaret introduced the name, which she had heard in the Hungarian Court where she was raised, into Scotland by naming one of her sons Alexander. The popularity of the name Alexander was ensured by the fact that it was born by three Scottish kings, the first being Margaret's son who succeeded to the throne of Scotland following the death of Malcolm III.

Early Origins of the MacElister family

The surname MacElister was first found in Kintyre, where they held a family seat from ancient times.

Early History of the MacElister family

Spelling variations are a very common occurrence in records of early Scottish names. They result from the repeated and inaccurate translations that many names went through in the course of various English occupations of Scotland. MacElister has been spelled Alexander, Alistair, MacAlexander, Alisandre, Alischoner, Alsinder, Alastair, MacAlexter, Callestar, Aleckander, Alexandri, Alisdair, Alaisder, Alestare, Alistare and many more.

Notable amongst the Clan from early times was Sir William Alexander (circa 1570-1640), 1st Earl of Stirling, Scottish government official, knighted in 1614, appointed Governor of the barony of Nova Scotia; William Allestry (Allestrie) (1588-1655), an English politician who sat in the House of Commons of England (1640-1643)...
Another 48 words (3 lines of text) are included under the topic Early MacElister Notables in all our PDF Extended History products and printed products wherever possible.

Migration of the MacElister family to Ireland

Some of the MacElister family moved to Ireland, but this topic is not covered in this excerpt.
Another 153 words (11 lines of text) about their life in Ireland is included in all our PDF Extended History products and printed products wherever possible.

Migration of the MacElister family

Scottish settlers arrived in many of the communities that became the backbones of the United States and Canada. Many stayed, but some headed west for the endless open country of the prairies. In the American War of Independence, many Scots who remained loyal to England re-settled in Canada as United Empire Loyalists. Scots across North America were able to recover much of their lost heritage in the 20th century as Clan societies and highland games sprang up across North America. Early immigration and passenger lists have documented some of the first MacElisters to arrive on North American shores: Sir William Alexander, Earl of Stirling, who colonized Nova Scotia, in Antigonish, Pictou, the Carolinas, Virginia and Upper Canada. Richard H. Alexander, traveled from Ontario in a group called the &quot.