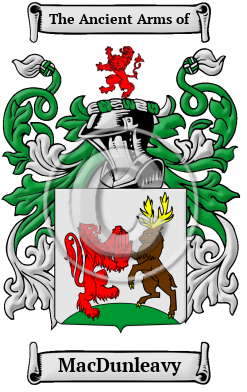 The Irish surname MacDunleavy originally appeared in Gaelic as Mac Duinnshleibh, derived from the words "dun," meaning "fortress," or perhaps "donn," which means "brown," and "sliabh," which means "mountain."

Early Origins of the MacDunleavy family

The surname MacDunleavy was first found in Ulidia, in northern Ireland, where they were said to have descended from the Princes of Ulidia, who were in turn descended from the Heremon line of Irish Kings; the modern name for Ulidia, is Ulster. The "Four Masters" list that in 1199, a Rory O'Dunsleve joined the English (Norman soldiers) at Meath and plundered the monastery of Saint Peter and Paul in Armagh. In the 12th century during the Anglo/Norman invasion of Ireland, the Dunleavys migrated to Tir Connell now known as Donegal and became hereditary physicians to the distinguished O'Donnells.

Early History of the MacDunleavy family

This web page shows only a small excerpt of our MacDunleavy research. Another 74 words (5 lines of text) covering the years 1644, 1694, 1761, 1694, 1728 and 1746 are included under the topic Early MacDunleavy History in all our PDF Extended History products and printed products wherever possible.

Names from the Middle Ages demonstrate many spelling variations. This is because the recording scribe or church official often decided as to how a person's name was spelt and in what language. Research into the name MacDunleavy revealed many variations, including Dunleavy, Dunlevie, Dunlevy, Dunlivie, McDunleavy, Donleavy and many more.

Notable amongst the family name at this time was Father Christopher Dunlevy, a Franciscan monk, who was martyred in 1644. Reverend Andrew Donlevy (1694- c.1761), was an Irish ecclesiastic, born about 1694, and received his early education in or...
Another 38 words (3 lines of text) are included under the topic Early MacDunleavy Notables in all our PDF Extended History products and printed products wherever possible.

Migration of the MacDunleavy family

To escape the religious and political discrimination they experienced primarily at the hands of the English, thousands of Irish left their homeland in the 19th century. These migrants typically settled in communities throughout the East Coast of North America, but also joined the wagon trains moving out to the Midwest. Ironically, when the American War of Independence began, many Irish settlers took the side of England, and at the war's conclusion moved north to Canada. These United Empire Loyalists, were granted land along the St. Lawrence River and the Niagara Peninsula. Other Irish immigrants settled in Newfoundland, the Ottawa Valley, New Brunswick and Nova Scotia. The greatest influx of Irish immigrants, however, came to North America during the Great Potato Famine of the late 1840s. Thousands left Ireland at this time for North America and Australia. Many of those numbers, however, did not live through the long sea passage. These Irish settlers to North America were immediately put to work building railroads, coal mines, bridges, and canals. Irish settlers made an inestimable contribution to the building of the New World. Early North American immigration records have revealed a number of people bearing the Irish name MacDunleavy or a variant listed above, including: Gregory Donlevy, who was naturalized in New York, NY in 1798; Walter Donlevy, who arrived in Philadelphia in 1813; Francis William Donlevy, who was naturalized in South Carolina in 1816.