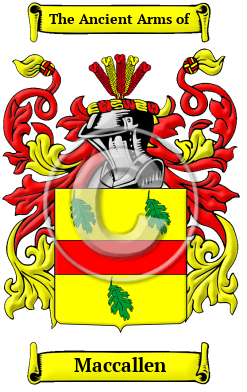 The history of the name Maccallen began when it was derived from the given name Alan, which is thought to mean "little rock" or "headstone." The name was popular among the Breton followers of William the Conqueror due to St. Alan, a 5th-century bishop from Quimper, Brittany; during the Middle Ages, parents often named their children after saints in the hope that the child would be blessed or protected by the saint.

Early Origins of the Maccallen family

The surname Maccallen was first found in the lands of Shropshire, where Walter FitzAlan of Brittany held a family seat after the Norman Conquest of 1066. The parish of Mileham, Norfolk is of early significance to the family. "This place, at the time of the Conquest, was given to Alan, son of Flaald, and ancestor of the Fitz-Alans, earls of Arundel, who erected a strong castle here, of which some vestiges may still be traced, within the area of an intrenchment of twelve acres; the site of the keep is pointed out by an inner intrenchment by which it was surrounded." [1]

Early History of the Maccallen family

The Old and Middle English languages lacked definite spelling rules, and therefore, Breton surnames have many spelling variations. Latin and French, which were the official court languages, were also influential on the spelling of surnames. The spelling of surnames was rarely consistent in medieval times, and scribes and church officials recorded names as they sounded rather than adhering to any specific spelling rules. Therefore, it was common to find the same individual referred to with different spellings of their surname in the ancient chronicles. Moreover, a large number of foreign names were brought into England after the Norman Conquest, which accelerated and accentuated the alterations to the spelling of various surnames. The name has been spelled Alan, Allan, Allen, Alleyn, Allayne, Allaine, Allain, Allanach, Allanshaw, MacAllan and many more.

Notable of this family during the Middle Ages was William Allen (1532-1594), an English prelate; Francis Allen (ca.1583-1658), an English financier, politician and regicide who sided with parliament in the civil War against Charles I; John Allen, or John Allin (1596-1671) English settler America in 1637-38, one of the founders of Dedham, Massachusetts; Thomas Allen (1608-1673) English nonconformist minister and divine from Norwich; Richard Alleine (1610-1681), an English Puritan divine; Sir Thomas Allin, 1st Baronet (1612-1685), an officer of the Royal Navy; William Alleine (1614-1677), an English minister; John Alleyn or Allen (1621-1663), Cornish politician, MP for St Michael, Cornwall in...
Another 161 words (12 lines of text) are included under the topic Early Maccallen Notables in all our PDF Extended History products and printed products wherever possible.

Migration of the Maccallen family to Ireland

Some of the Maccallen family moved to Ireland, but this topic is not covered in this excerpt.
Another 93 words (7 lines of text) about their life in Ireland is included in all our PDF Extended History products and printed products wherever possible.

Migration of the Maccallen family