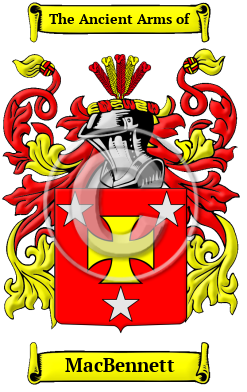 The age-old tribe of the Strathclyde Britons of the Scottish/English Borderlands were the first people to use the name MacBennett. It is derived from the ancient Latin given name Benedictus, which means blessed.

Early Origins of the MacBennett family

The surname MacBennett was first found in Perthshire where "Benedictus, son of Walter de Sancto Edmundo, witnessed a charter of sale of land in Perth, 1219. Benedict the dean (decanus) witnessed the gift of the mill of Wystoun to the Hospital of Soltre in 1249. The fame of Saint Benedict (480-543) the patriarch of the Western monks made the name popular. " [1]

Early History of the MacBennett family

In the era before dictionaries, there were no rules governing the spelling or translation of names or any other words. Consequently, there are an enormous number of spelling variations in Medieval Scottish names. MacBennett has appeared as Bennett, Bennet, Benett, Benet and others.

Notable amongst the family at this time was Sir Thomas Bennett, Sheriff of London in 1594, and Lord Mayor (1603-1604); when he was knighted, he purchased the manor of Beachampton in Berkshire; W. Benett, who was the Mayor of Chester in...
Another 41 words (3 lines of text) are included under the topic Early MacBennett Notables in all our PDF Extended History products and printed products wherever possible.

Migration of the MacBennett family to Ireland

Some of the MacBennett family moved to Ireland, but this topic is not covered in this excerpt.
Another 125 words (9 lines of text) about their life in Ireland is included in all our PDF Extended History products and printed products wherever possible.

Migration of the MacBennett family

The freedom, opportunity, and land of the North American colonies beckoned. There, Scots found a place where they were generally free from persecution and where they could go on to become important players in the birth of new nations. Some fought in the American War of Independence, while others went north to Canada as United Empire Loyalists. The ancestors of all of these Scottish settlers have been able to recover their lost national heritage in the last century through highland games and Clan societies in North America. Among them: Samuel Bennett who settled in Lynn, Massachusetts in 1635; Richard Bennett in Salem, Mass, 1636; David Bennett of Rowley, Massachusetts a Physician, and many more. In Newfoundland, William Bennet settled in St. John's in 1675.