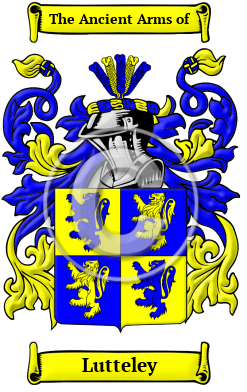 Early Origins of the Lutteley family

The surname Lutteley was first found in Worcestershire where the name is a local name 'of Luttley', a hamlet in the parish of Hales-Owen [1]. Today Lutley is an area of Halesowen in the West Midlands of England. The ancient pathway named Lutley Gutter runs through the area. In Staffordshire the earliest records of the name were found: Philip de Lotteleg and Thomas de Luttelegh, both recorded during the reign of King Edward I. Philip de Lotteleg (Luttley) "was the ancestor of the family the direct line of which terminated in an heiress in the reign of Henry VI. But Adam de Luittley, younger brother of Philip was grandfather of Sir William Luttley, Knight of Munslow Hall, Shropshire" [2] and it was from him the hereditary line continued.

Early History of the Lutteley family

This web page shows only a small excerpt of our Lutteley research. Another 147 words (10 lines of text) covering the years 1510, 1600, 1241, 1396, 1455 and 1487 are included under the topic Early Lutteley History in all our PDF Extended History products and printed products wherever possible.

More information is included under the topic Early Lutteley Notables in all our PDF Extended History products and printed products wherever possible.

Migration of the Lutteley family